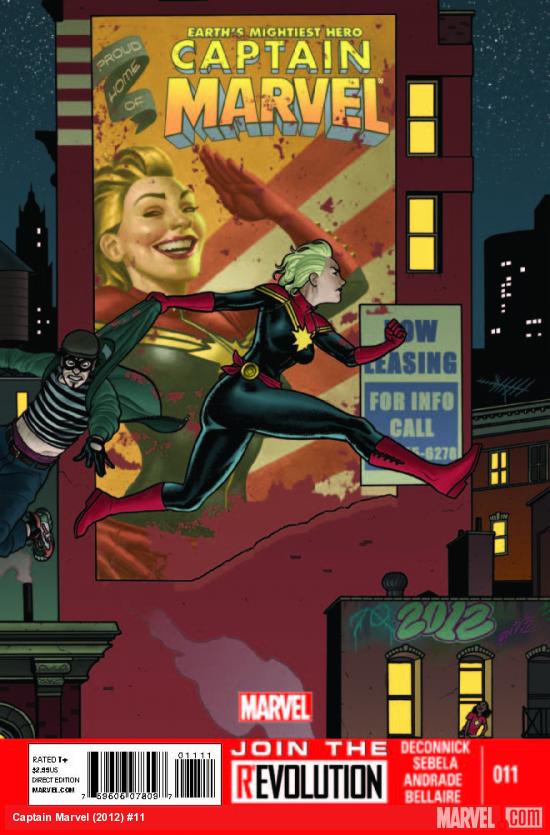 You know all those Internet rumors about the cancellation of Captain Marvel? The editorial team reassures readers that Carol will continue to star in her own series for many more stories. This news comes at the heels of yet another great book from DeConnick and her talented team of comic book writers.

Carol is hospitalized after her fight with Deathbird in last month’s issue. The doctor urges Carol to take it easy; if she continues to fly, the tumor in her brain could continue to expand and cause a brain hemorrhage. Carol loves to fly. If there is anything that readers can take away from the first arc in the series, it’s that Carol lives to fly. Asking her to stop flying is like asking her to give up being a superhero – flying is so engrained into her personality, it’s not even a consideration. It’s only through pleading that Carol takes the doctor’s orders to heart.

As Carol learns to deal with her newfound loss of powers, the man pulling Deathbird’s strings orders her to deliver a package. While not much is revealed about this man in this issue, we get the feeling that he is intimately familiar with Carol’s life and who matters to her. This could mean trouble for her friends and neighbors.

Captain Marvel #11 does a fantastic job of continuing the day-to-day story that was started several issues ago. What once was a simple to-do list is now a convoluted list of problems and concerns with no solution in sight. Coffee with Jessica? Now it’s trouble with a T-Rex cloned from one in the Museum of Natural History. Meeting with Frank? Now it’s an issue of Carol’s endurance and well-being. If anything can be learned from Carol, it’s that we shouldn’t expect our days to go as planned.

There’s no doubt that Carol has a serious fan base. Just check out Carol Corps on Tumblr. Look at the love Kelly Sue DeConnick has for people who love reading this series. Once you read an issue of this series, you understand why people want to dress like her and participate in the Corps. Carol is an inspiration to all readers, male and female, and encourages people to be true to what you love and dedicated to those you love. Give this series a shot and see what people are talking about.