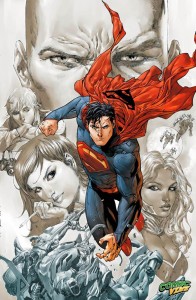 Anyone who was excited for Andy Diggle’s run on Action Comics beginning in April had best contain themselves. Diggle revealed today, via Twitter that he was leaving the book before the first issue even came out citing professional reasons.

“Sadly, I’ve decided to walk away from Action Comics for professional reasons,” Diggle said on his Twitter account. “It was the toughest decision I’ve ever had to make, especially with Superman’s 75th anniversary and Man of Steel on the horizon. But it was the right decision. No regrets. Onwards!” Diggle finished his Twitter revelation saying, “sincere thanks to Matt Idelson for inviting me to follow Grant Morrison on Action Comics. I hope we still get to work together someday.”

Its unclear whether Diggle met with internal differences like some of DC’s writers have spoken out about in the past or whether another opportunity that couldn’t be passed up came along. DC has stated that Tony Daniel would be finishing the arc as writer/artist starting with issue #20. Whether Daniel continues on the book after the arc is over or a new creative team is brought on is uncertain at this time.