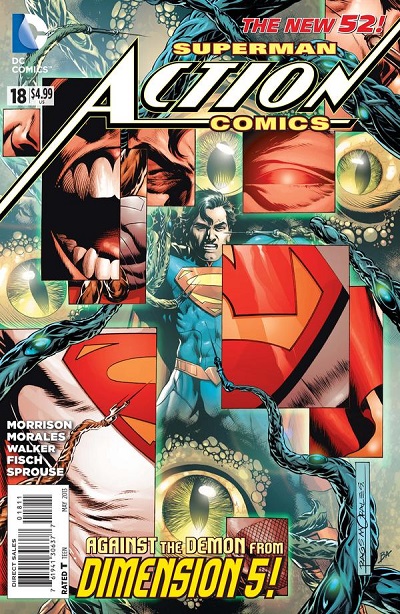 The road to hell is paved with good intentions.  That is the phrase that kept running through my head as I tried to let the final chapter of Grant Morrison’s epic 18-issue arc (and do not let anyone tell you it is anything but an 18-issue arc) sink into my pondering noggin.  Because for all of the great ideas, plans, and intelligent commentary that has been delivered on this particular run by Morrison; it is a culmination of its timing mixed with its presentation that have kept this title from being as sharp as it should have been.  We can get into that a little more below, but for now, how does Action Comics #18 stand on its own?  In two words that sound much harsher than they truly are out of context, it doesn’t.

One of a multitude of simultaneous final showdowns across space, time, and realities; Superman makes his stand against the otherworldly assaults of the Fifth-Dimensional imp Vyndktvx with the help of friends and allies from across all of creation (including assistance from Grant Morrison, Rags Morales, and you).  Utilizing more than just his powers of strength, can the symbol of everything good possibly defeat a being that can dismantle him down to his very core conceptualization?  Also, in the backup story by Sholly Fisch, a young alien visits a museum exhibit in the future and learns exactly what Superman stood for.

As I stated in the introduction, by its very nature of being the finale in such a long arc, this issue does not, and cannot, stand on its own.  Add in the complexities (complexities that some would argue are created for their own self-purpose) that Morrison seems to enjoy pre-building into his narrative layouts, and you basically get an issue that is practically worthless out of the context of the larger overarching tale.  That is not to say the issue is without some merits, as the backup is a great example of simple storytelling that jumps through all of the representations of Superman across the entirety of media, and acts as a sliver of ginger to return the readers palette to one of normalcy after the crazy that came before.  But in the main show, unless you have been reading and paying attention throughout the run, it jumps about too chaotically for a curious new reader to really understand what is occurring.

From someone who has read the entirety of the run, there are a load of really smart ideas if you want to doggedly pursue them hard enough.  Utilizing a storytelling device such as a fifth dimensional being that does not play by our rules of time in order to back-fill the missing 5 years of Superman’s career without making it a history lesson is a really intelligent way to relaunch such an iconic character with an altered past.  Pitting the pure symbolic ideals that comprise the essence of Superman against the physical manifestation of the corporate-mandated licensing machine he has become (while writing the story for the very company that has created the ‘evil’ franchise Superman itself) is another brilliant subtext that is addressed.  Linking previous reboots of tangential characters and creating a story-driven reasoning behind the differences in each iteration, exploring the roots of what makes Superman such an icon to people everywhere, and encapsulating all of the above into one self-contained, self-referential, full circle of a story; all of these are things that I can heap praise upon the title for.

Where it all falls short in my eyes though, is the delivery.  Because for all of the wheat buried within the labyrinth of storytelling chaff, it is damned by its own overzealous nature to be the definitive start of a new rebooted Superman.  The ideas are all there, but to make this the inaugural launch of the flagship Superman title is both commendable in its ballsy nature, as it is foolish for trying to introduce new readers with such a convoluted structure.  This is all my opinion of course, and I even had the entire story click into its conceptual place with issue #15, but more people I speak to abandoned the title due to its non-traditional storytelling methodology than stuck with it to even be exposed to the intelligent story that was at its core.  Which is a shame, because once detangled, there is a lot of content to mine from the run.  But that is a hard thing to generalize for all in a review, as it essentially comes down to what the individual expectations are between the reader and the creator.

Artistically in this issue, Rags Morales and Brad Walker actually do a great job of playing off of each other within the context of the story.  Art shifts are jarring, and they are absolutely meant to be as the story lurches to and fro through reality.  It is a design choice, even though it was more than likely forced due to logistics, that actually plays into the final chapter quite well.  Singularly though, Morales delivers what could be the most unified and consistent issue of the run; with facial expressions at the strongest he has been able to bring thus far.  The action scenes are a little on the lethargic side, with minimal motion really captured, but to be fair the physical nature of this issue plays second fiddle to all of the cerebral items happening around it.

Sadly, I give this issue by its lonesome a pass.  If you are up for working for your entertainment, I do recommend reading all 18 issues in its entirety though, as there are a lot of elements both within the story and meta-contextually to make it worth your while.  Don’t get me wrong, I am not saying to pass on this because it is complex, but judging it as a singular issue it should not be impenetrable to all except for silly completists like myself.  So while his intentions and designs may have been grand in scope and sound in thought, Morrison’s execution on those overlying themes and ideas have ultimately led to the downfall of the story itself.