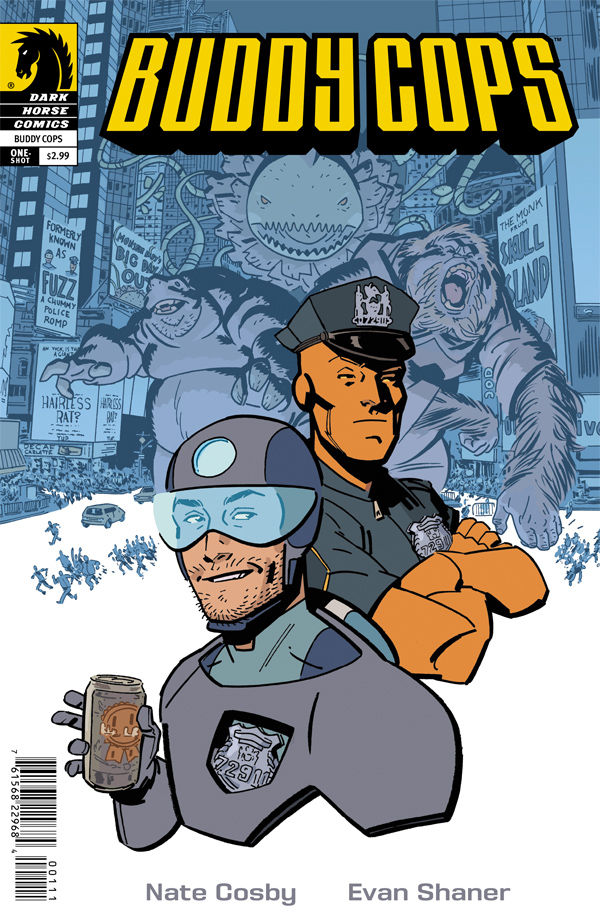 To try and describe the plot, characters and tone of Buddy Cops is to take a roller coaster ride at the carnival of the the bizarre.  In short, it’s the story of partners, one is URANUS a former space cop – think Green Lantern or Nova Corps – who has been demoted to the NYPD for being a drunkard. The other is a by the book police robot from the 1970’s named T.A.Z.E.R..  Together, they fight monster crime on the streets of New York and of course, they hate each other. It’s a bombastic, brightly colored romp of a book that keeps the jokes flying at a mile a minute. In Buddy Cops not all of those yuks hit, but it does produce some of the biggest belly laughs I’ve ever had while reading a comic.

The mastermind behind all of this is Cow Boy: A Boy and His Horse writer Nate Cosby. I fell in love with that book because of its mix of humor and heart, and while Buddy Cops is light on the sap, it’s easy to see the connecting DNA between the two.  Here, Cosby is attempting to take the tried and true relationship between the loose cannon hot shot and the by the book bore to its most insane extreme. What comes out of it is a comic yarn that at times reach levels of sublime hilarity. One of those moments includes a perfectly paced page turning reveal, and a montage in which the author asks you to play Lionel Richie’s “Hello” in order to achieve maximum enjoyment.

Those moments are fantastic, but a lot of the enjoyment you get out of the book will hinge on whether or not you find Uranus’ particular brand of humor entertaining. He’s the kind of guy who car surfs saying things like “Bring Da Muth***in’ Ruckus!!!” and constantly makes jokes about his robot partner having sex with blenders. This may seem obnoxious, and at times it is, but once you settle into the cadence of the character, I dare you not to crack up. In fact, as I made my way through Buddy Cops I began to see Uranus as a kindred spirit to FX’s womanizing spy Archer, and once I made that connection I found him more endearing than off putting.

Cosby’s writing is sharp, but it’s the art by Evan Shaner that really lands the jokes. There is a lot of broad comedy in Buddy Cops, and Shaner achieves it by knowing when to layer in details, but also when to hold them back.  The book is colorful, stylish and in many ways reminds me of a sillier David Aja.

Buy It – I’m taking a chance on this, because the humor is very broad, and the characters very big. But, Buddy Cops is one the few laugh out loud books I’ve ever read. Nate Cosby has a sharp wit, and Evan Shaner brings a style and fun that is delightful to behold.  So, if you enjoy Archer, Lionel Richie and onomatopoeia like “MONSTERSWAT” get this book!