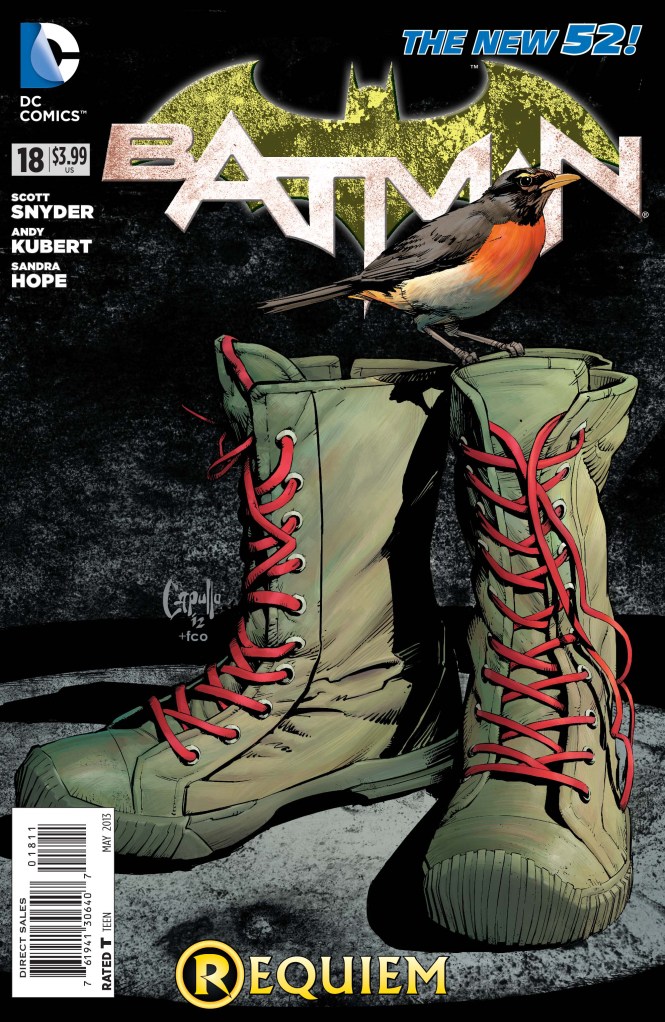 Death is a transient state in comics, and because of that it may be easy to write off the aftermath of the death of Damian Wayne as trivial.  After all, if the character will just be resurrected in a year or so, why does it matter how his demise is handled?  Well I say if this is temporary situation, then how it’s handled is really all there is. Years from now we will be able to look back and say “Yeah, they messed up when they brought him back, but go and read those issues after he passed, those were really great.”  Batman #18 is an exemplary goodbye story and another sterling issue in Scott Snyder’s stellar run. In fact, if not for the brilliant Batman and Robin #18, it would be the standout title of the week.

It’s important to know before reading this issue that this is not the place you are going to find The Dark Knight’s perespective on the death of his son. No, Snyder has rightfully left that to Peter J. Tomasi and Pat Gleason to tell in Batman and Robin (which if you haven’ read yet, what are you doing?) Instead, the Batman scribe has decided to tell his Requiem tale from the perspective of Narrows dweller Harper Row.

Ms. Row has been following Batman for months now, tracking his every move and using him as inspiration to become her own brand of crime fighter. It’s this superhero stalking that lets her see just how close to the edge The Dark Knight has become and this issue is all about her standing up for the person who stands up for us all.  Which is just one of the reasons that her turn in Batman #18 will add fuel to speculation that she will be the next Robin. Another log on that blaze is added because intentionally or not, Snyder has written her with little aspects of the previous Boy Wonders.

She has the technical smarts and humor of Tim Drake, the seedy parentage of Jason Todd and the personal tragedy of Dick Grayson. Yet, with all these traits, it’s the heart, the compassion and the perseverance that really make Harper Row such a special character.  You feel for her, you root for her and you suffer pain with her. It’s a testament to Snyder’s ability as a writer that a brand new addition to the universe can be embraced so quickly.

As a fan of Grant Morrison’s time with Bat-books I was delighted to see Andy Kubert return to the character. I’ve always loved how ferocious and imposing his Dark Knight is, and it’s especially fitting seeing how this issue is from the perspective of a character who sees him as larger than life. Kubert brings Batman’s inner struggle to physical life by indulging every tatter, burn, rip, and bloodstain in Bruce’s costume and not only is this completely fitting, but it is also utterly bad ass to look at. I ‘ve fully embraced Greg Capullo’s Caped Crusader as my own, but there is a part of me that will always love the snarl Kubert puts on ole’ Bats face.

The art in “Chapter Two” of the issue is handled by Alex Maleev, and the change in style is the perfect mirror to the change in tactics by Harper herself. Maleev’s work is much subtler than Kubert’s, and with that subtlety comes a sweetness missing from the earlier pages. This second section, co-written by James Tynion IV, is a bit wordy, but that doesn’t lessen the emotional punch at all. I won’t spoil the payoff, but it’s another moment that cements my desire for Ms. Row to be around for a very long time.

Buy It- With Batman #18 Scott Snyder has once again proven he can deliver a stand alone issue just as well as he can sculpt an arc. His decision to center this book on Harper Row, is both respectful to Pete Tomasi, and a deft creative move in its own right. The art by Andy Kubert and Alex Maleev is excellent across the board, and the issue manages to evoke both Batman stories of old and give us a taste of something very new.