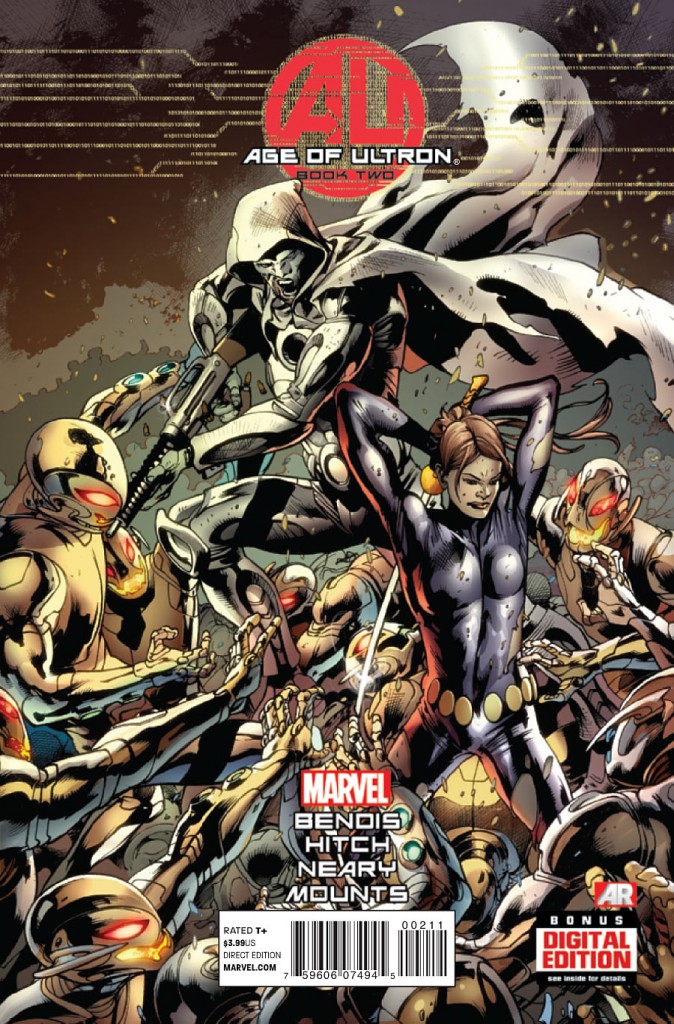 Like many of you out there, I am skeptical about event titles. Often times they needlessly spill over to countless other titles where they don’t belong. They can leave a bad taste in your mouth; somewhere between pennies and that disgusting Japanese fermented bean gunk known as natto. Hopefully, Marvel’s Age of Ultron won’t be one of those books. (There will be tie-ins, but they aren’t going to affect the current ongoing stories in your books.) I picked up issue number one last week, and to my surprise I thoroughly enjoyed it. Bendis was quick to grab us and pull us into this Ultron dominated world with very little exposition.

Issue number two takes a turn from the action and fast paced story telling of last week’s installment, and instead slows things down and begins to flesh out what went down. Bendis also shifts the focus in the first half of the book over to the west coast of the United States. As we might expect, things aren’t so different from coast to coast.

Black Widow and Moon Knight serve as the centerpieces of our time in San Francisco. The world has changed and even these two heroes show a lack of concern to help others. Black Widow doesn’t even attempt to save a group of humans or distract the robots attacking them. There has to be long lasting effect to any sacrifices made. Dying for people that will just as soon die tomorrow or shoot you in the back is no longer an option. If you are going to die you better be taking this sumbitch Ultron with you.

The second half of the issue is back in New York and the heroes listen to Spider-Man tell his recollections of events so far. I was always amazed at Spider-Man’s ability to never give up, even when things are at their lowest. He is always an inspiration and you can see the strength of Peter Parker shining through. I was holding out some hope that this might be Peter, but Dan Slott has tweeted that this is indeed the superior Spider-Man. I’d like to remain skeptical. (Slott’s been known to throw out misdirection in his tweets. Besides he’s said it is the superior Spider-Man, not Otto.)

By the end of it all, I don’t feel like the issue progressed much story-wise, as it acts as a setup for the bigger actions to come. Although, Bendis’s dialog and the interaction between the characters helps to convey the deep state of despair in this world.

With regards to the art in issue two, I felt things were a little off. Occasionally, some of the characters poses felt a little unnatural. It was like some of the limbs were angled slightly off; throwing off the perspective and making them look flat. I did, however, enjoy the continued use of a more subdued color palette.

Hmm. I’d say this is a soft buy. The art wasn’t my favorite, and despite a slower pace, issue number two sets the tone and continues to setup the Age of Ultron. Issue three looks like it will be picking things right back up, so why miss out on some key dialog this issue?