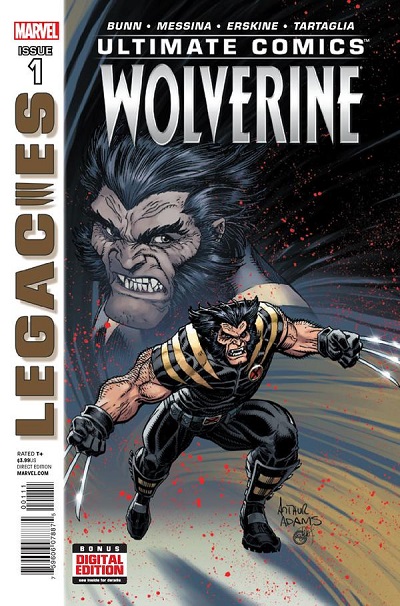 What’s this?  Sean is reviewing a Marvel comic you say?  Cool your jets folks.  While I tend to focus mostly on the DC side of things in my reviews, I have quite a few books I read and enjoy on the Marvel side of the aisle as well.  So when I saw a new series from Cullen Bunn (whose The Sixth Gun title I swoon for each month, but is probably better known currently for writing the adventurous romp in Fearless Defenders) taking place in the smaller self-contained Ultimate universe of Marvel, I figured I would give it a shot.  And overall, I’m fairly pleased I did, as Ultimate Comics Wolverine is approaching this rather overused character in a completely different angle than what I am used to.

Years in the past find Logan as the field commander of an elite government covert ops team, hot on the trail of a plot by an organization to abuse mutants for their own nefarious purposes.  Following the clues, he and his team find all is not what it seems as the links they uncover only lead to more questions.  Meanwhile in the present, the son of the now deceased Logan, a young man named Jimmy, tries to sort out his own questions of his heritage after finding out that his biological father was Wolverine.  Raised by a kind and loving family, Jimmy now finds himself pulled into an even bigger mystery when secrets are recovered from within the recording Wolverine left him; leading him to search for answers to the intriguing plans that his father attempted to thwart years before.

Being relatively clueless on the Ultimate imprint as a whole, this was actually presented in a very considerate manner for we newcomers to this side of the Marvel universe.  The characters of Logan, Jimmy, and even most of the supporting cast are established in quick order, and allow an actual mystery to start up without wasted space in the first issue.  It’s obvious that the two separate stories are dovetailing out of the same larger narrative source, and should provide a rather interesting storytelling method as the scenes can jump back and forth to setup and resolve various beats throughout the run.  Bunn clearly has a direction in mind, and seeds a good 6-7 mysteries all in the first issue that should give him a deep well to draw from as he continues forward.  Thematically, the issue reads a lot more like a Tom Clancy’s Wolverine, dealing more with secrets, questions, intrigue, and mystery than it does with the usual action style I would expect from a Wolverine title.

The artwork by Messina is extremely sharp and clean, lending a summer blockbuster feel to the issue as it dances through its black ops intrigue storyline.  Blatantly basing the design of Logan off of the Hugh Jackman reference, it manages to do so without falling into the pit of looking creepy in its efforts to emulate the actor.  While the layouts and staging of the scenes are less than bold in its risk-taking, it is still more than sufficient for the feel of the book.  It may even be that the straightforward nature of the layouts is to counterbalance the twists and turns of the plot, so this could be a design choice by the team to play it safe in that arena.

It’s worth a try if you are interested.  Those who know nothing about the Ultimate line can feel safe jumping in cold from here, as Bunn and the rest of the team do a great job of using small items to bring people up to speed throughout.  While you can easily get your Wolverine fix by practically picking up any title with a Marvel imprint, this title (as do most of the newer Wolverine vehicles) is using its difference in approach to separate itself out from the crowd and fill a niche for anyone who may be looking to follow the adventures of Jack ‘Logan’ Ryan styled plotline.