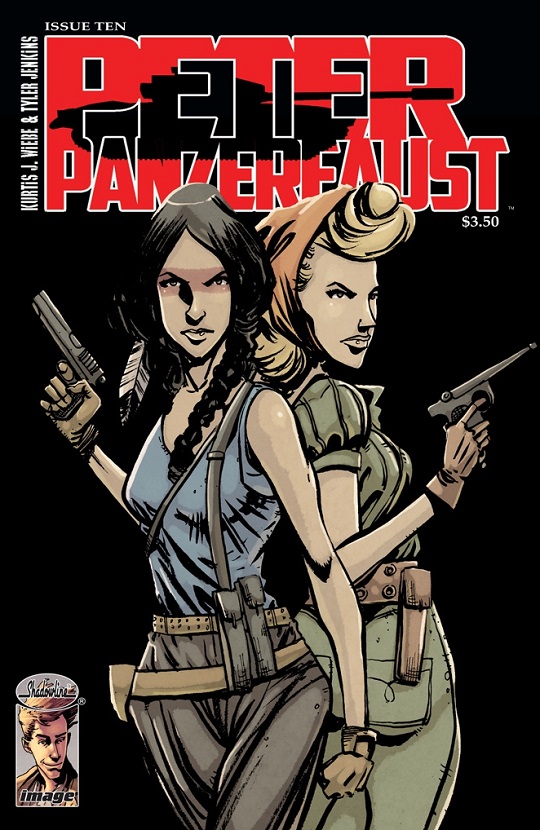 Coming off the heels of two very exciting and artistic issues, issue #10 of Peter Panzerfaust doesn’t quite reach the bar set by the preceding installments. With that being said, I don’t want you to think that this means it is in any way a bad book. It still hits the emotional beats of friendship and love that run throughout the entire series.

As Julien’s recollections of events come to an end this issue, he leaves us with a little more insight into Peter and Wendy’s relationship. Until now Wiebe has only given hints as to the nature of their relationship, but by the end of the issue we can begin to grasp that they need each other for hope and to share the burdens of war. I suspect that Wiebe will be exploring this dynamic more in the next story arc.

My biggest let down this issue was with the art department. This didn’t feel like Jenkins best work on the series, and it felt a little rough. His layouts and framing were great, but the art itself was lacking some detail that has been present before.

I normally don’t talk about lettering, but I think Ed Brisson deserves applause. He’s done a great job, and the word bubbles and boxes rarely feel like they are in the way; they feel appropriately placed.

While not my personal favorite of the series, Peter Panzerfaust is still a buy. The second arc concludes here, and it continues to bring a lot of heart and develop characters we like and want to read. The art suffers a little, but I have faith it will bounce back next ish.

Jumping on Point: This was the end of the second arc. Jump on next month with issue #11.