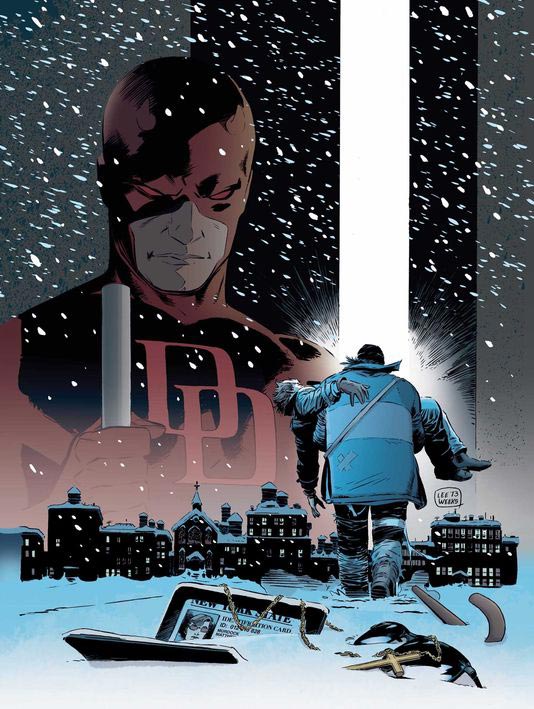 The Man Without Fear is looking to expand his horizons with a brand-new anthology series titled “Dark Nights.” Taking place outside of the current Waid continuity, these stories are hoping to explore the character of Daredevil a little more and present some “moral grey areas” for him to deal with. The first three issues will be written and drawn by Lee Weeks, who tackled the character (at least art-wise) before  in the Fall of Kingpin storyline. While this is his first time writing the character, Weeks has big plans for the character after  “seeing a lot of grayness in the heroic storytelling of today.”

“And not just in comics but in the culture. I was taken aback by some of the things some of the characters had done. So I just wanted to tell a story about what it is to be a hero. It seems like there’s been a love affair with ambiguity sometimes.”

He explains that it will be a “stripped down” story that focuses on the inner workings of the character.

“A massive blizzard has hit New York City, and Daredevil loses his identity — physically, briefly, thanks to a severe concussion — but finds that he’s the only hope for a little girl in desperate need of a heart transplant after her donor heart goes missing. In Jack London-esque fashion, and with compromised radar, Daredevil must trek across an icy, immobilized Manhattan, find the lost organ box, and deliver its precious cargo before the ticking clock of the heart’s viability runs out. And in the recovery of it, Daredevil spends much of the story reclaiming his inner identity, as well: who he is and what makes him tick. It’s a story about hope against hopelessness and redemption. No matter how heroic or how big anybody might be, there’s also a big element that nobody’s doing it alone.”

Daredevil: Dark Nights will be released in June.

What are your thoughts on Dark Nights? Should there be a Daredevil anthology book? What about Week’s story? Leave your thoughts in the comments below.