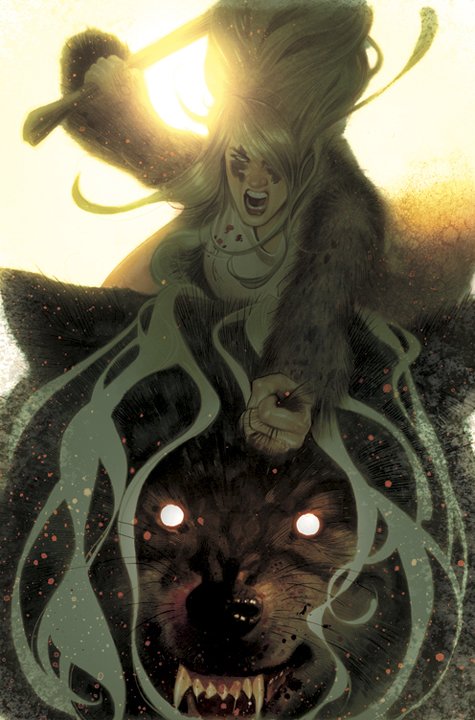 Rapunzel has undergone an extreme change from her first appearance in Fairest. No longer a timid character, Rapunzel fights for her love and her livelihood. The first image of Rapunzel in this issue conveys her resolve: utilizing a coat of bezoars, she’s out to get things done.

Bigby and Totenkinder band together with Katagiri to go after Tomoko and her group of Japanese fables. Bigby is notably concerned by the apparent lack of preparation on the part of Katagiri. Katagiri, however, has something up his sleeve.

The elusive Jack has a little something up his sleeve as well. His position under Tomoko’s thumb leaves him with nothing to work with other than charm. If we know Jack, we know that he’s always looking out for number one. Tomoko’s foxfire is a source of powerful magic. Jack just can’t let an opportunity like that go.

Admittedly, the bezoars are creepy. Half-digested hair with a mind of its own? It’s brilliant, especially their roll in this final issue of the Hidden Kingdom arc. Rapunzel refers to the bezoars as her children. In a way, they are a manifestation of her most desperate hour. They were created out of fear, and therefore emit fear. Tomoko will do anything it takes to stop the bezoars.

Inaki Miranda creates beautiful recreations of the Japanese fables as they prepare for battle. The panel design during the showdown between Tomoko and her fables and Katagiri and his gang is stunning. The movement feels natural from one action point to another. Each page is rich in detail, inviting the reader to take their time and examine each unique character.

Wow, what a beautiful ending. Beukes and Miranda are a comic book force to be reckoned with. Their arc was engaging throughout each issue, the characters were memorable, and the artwork was gorgeous. This last issue was a fitting end for the Hidden Kingdom arc. Be sure to check out the full arc from your comic book shop, Comixology, and in trade when it hits stores.