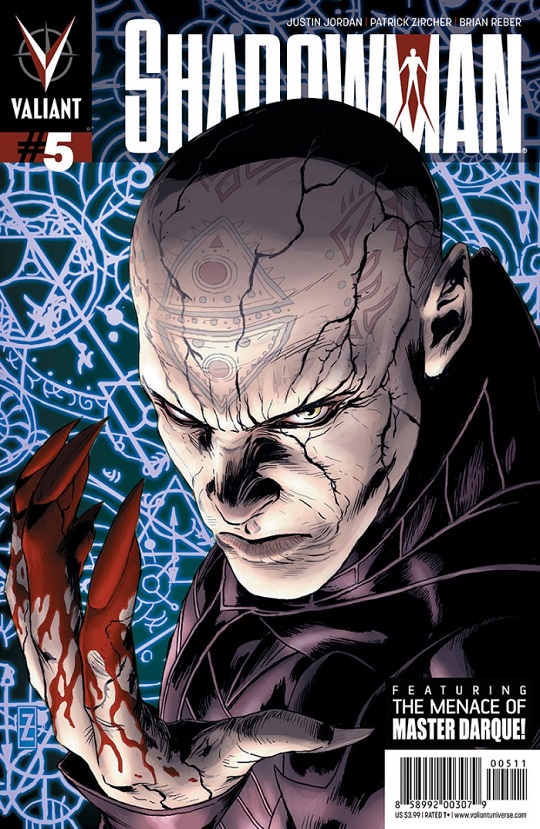 Last month gave us a rather action packed issue that saw the end of Mr. Twist and the entry of Master Darque. Issue # 5 follows up with a more subdued issue as forces on both sides recoup and reestablish their plans and preparation.

Jack finds out through a hard lesson that now that he is Shadowman, he can’t have his old life. His two abettors Dox and Alyssa both feel they are partly to blame for this lesson; they haven’t been properly preparing Jack for what his new life will be like. In all honesty, I felt that this part of the issue was the least interesting part. It’s a necessary realization for Jack to face, but it’s something that has been seen in many other hero stories. Fortunately, I found that the rest of the issue added a little more to the expanding Valiant universe and the world of Shadowman through the introduction of some new pieces on the board.

Doctor Mirage makes her first appearance, and that’s what had been bringing most of the press to this issue. Her ability to commune with the dead should make her a useful ally for Shadowman. I’m interested to see how Jordan and Zircher will expand her role in this series and then out into her own upcoming series. Baron Samedi (the voodoo god of death) will also be playing a role in the upcoming showdown, but how much of one has yet to be seen.

Instead of trying to show us what is going on everywhere, I would’ve liked to have seen more of a focus on either Dr. Mirage or Master Darque. I feel this issue is trying to show us too much. Perhaps breaking that up between two issues would give us more to get solidly invested in these characters.

I can’t say that this issue is a definite buy. It’s an in between issue that introduces some new players and serves to setup the next chapter of Shadowman. It has its moments, but it suffers a lot from pacing.