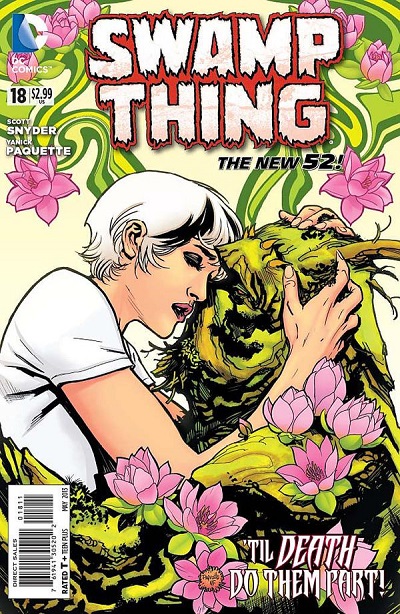 As Scott Snyder and Yanick Paquette’s run on Swamp Thing comes to its natural close, there is no better time to talk about the prevailing theme of cycles contained within.  Growing this recently-neglected germ of an idea into a surprise darling at the relaunch of the New 52, the pair have cultivated a chapter in the story of Alec Holland that could possibly stand alongside its Vertigo predecessors in overall quality.  But as all things have their time to thrive, they also have their time to end.  And while I will be the first to admit there were a few weeds in the garden during the Rotworld event, I am happy to say that the final bloom on the run just may be the sweetest.

Pulling together every scrap of resistance they could within the Rotworld nightmare, Alec Holland has struggled to find his way back to our timeline to save his beloved Abigail from the clutches of her malicious uncle and Avatar of the Rot, Anton Arcane.  With the cost of victory so high though, will Alec Holland be willing to pay the price to win the day?  And what will become of the star-crossed lovers even if their plan should succeed?

While I know the Rotworld event was highly anticipated, this issue gets back to what made me enjoy the series overall beforehand with its bittersweet climax to the story that has been told throughout the run.  Because for all of the grotesque spectacle that has been at the forefront, this modern-day Romeo and Juliet tale has been a romance at heart, and this final chapter puts that firmly into perspective.  Snyder’s dialogue is all over the emotional map in a good way; playful at times, and full of rage-fueled concern at others.  The entire run has been the birth, life, death, and rebirth of so many angles within the story, that it is great to have the final chapter feel so melancholic yet laced with the longing that rebirth will bring hope.  Tidying up all of the loose strands of the run, Snyder has built a new status quo for the character and his cast, and one that will lend easily to any direction the new creative team decides to take next month.

In the artistic arena, Yanick Paquette continues to dazzle with his creative and emotive pages.  As I stated before, though the haunting and visceral images have drawn the eyes of many during this run, it has been the simple and quiet emotional resonance that has set the artwork above others for myself.  And this final emotional roller coaster of an issue does a wonderful job of highlighting that strength (while still allowing him to draw some nightmares come to life as well).  The panel layouts continue their distinctive and living format, a design choice that I hope continues forward as it lends so much personality to the pages contained within.

It’s a buy.  Snyder and Paquette do a splendid job bringing both their arc and their run to a natural yet emotion-filled end.  Focusing the spotlight back on the pair that have been the center of the theme’s exploration, it is a fitting epilogue to an overall entertaining run.  Now, we can only wait and see what Charles Soule and Kano do to tend the garden of stories left behind and hopefully produce yet another batch of amazing tales; and the cycle can begin anew…