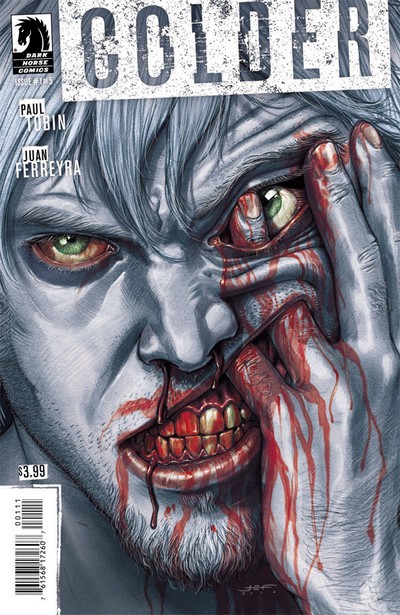 This series opens with an occupied insane asylum burning. I was hooked from page one. Patients are freaking out, some not as much as they should be, the doctors and staff obviously clueless as to how to control the fire or the escalating madness. In the center of all this stands a man who whispers not a word and appears to be quite unshaken by the chaos and flames all around him. Just when you think the crazy frosting is on the cake, a hole opens up and out climbs the cherry on top, otherwise known as Nimble Jack.  Jack is the eater of insanity and he’s come to feast, but rather than consume the entire meal at once, he chooses to leave one special chunk of meat to tenderize with time and that meat is Declan.

Fast forward about 60 years and Declan is somehow still alive but no more alive than he was back in the asylum. A sweet, pretty nurse has been caring for him for years, although Declan hasn’t spoken a single word. As the story unfolds it’s revealed that this silent man is neither as helpless or as crazy as he appears. He has developed his own unique powers to step inside the mad world of others’ heads and even to heal them, at a price of his temperature dropping every time he uses his abilities. He’s already much colder than should be possible for a living human and how much colder he can get is unknown. It seems like things are looking up for him when he awakes from his mental slumber; too bad his old pal Nimble Jack is watching closely, still very much interested in getting a taste of what’s been simmering in Declan’s mind all these years.

Colder is a five issue miniseries by writer Paul Tobin and artist Juan Ferreyra. This is one of the coolest, most creative stories I’ve read this year and incredibly creepy. Nimble Jack is a great mystery right up until the end, obviously a bad dude but never too clear about what or who he is. Declan tries so hard to make things right but only digs himself and the one he loves in to an ever deeper, colder grave. What does it mean to be crazy? Is it really a prison or is it a powerful tool? Can you beat insanity or does it immediately and permanently become who you are? Colder asks all sorts of uncomfortable questions about mental instability and where it leads us and does so in a terrifying, sad landscape full of lost souls.

The art is gorgeous, especially the covers. I chose the cover of issue #1 to display here because it’s one the most unnerving book covers I’ve ever seen.

Verdict:  Buy this. It’s smart, psychological and makes your brain feel weird. I loved this series and am mad (see what I did?) to see it end so soon.