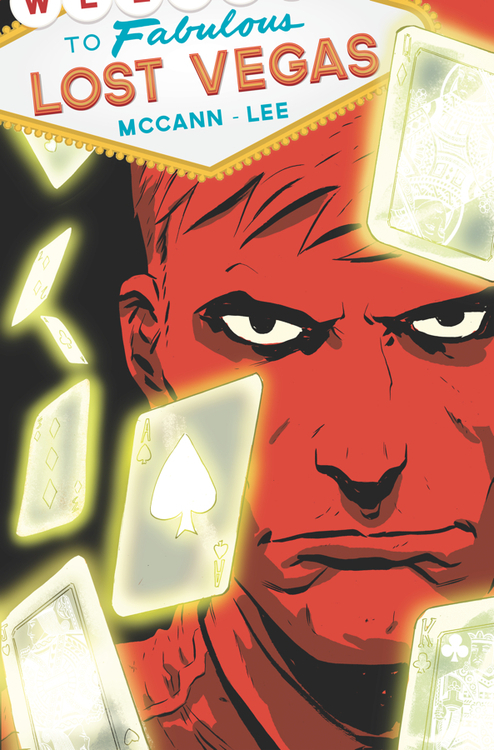 I like to play this game with the comics I review where I try to come up with some sort of pop cultural metaphor that could help frame the book for new readers. For Jim McCann and Janet Lee’s new series from Image, I’d like you to think of a young Paul Newman (circa 1961’s The Hustler) starring in the indie-studio crossover between The Fifth Element and Ocean’s Eleven. Got that in your mind’s eye? Now wash it in a stunning, über-classy deco-inspired aesthetic and add in an amorphous, telepathic, symbiotic blob-named-Ink, and you’ve got the pop-cultural foundation for Lost Vegas.

Jim McCann and Janet Lee were nominated for five Eisner Awards back in 2010 for their Archaia Studios graphic novel, Return of the Dapper Men. McCann is also known in the mainstream for his work over at Marvel on several Hawkeye/Mockingbird minis and the wonderfully morbid Marvel Zombies Christmas Carol. Also out of the Image camp, McCann’s recent work on another creator-owned series, Mind the Gap, has been garnering critical acclaim for its mind-blowing suspense-supernatural-thriller narrative. Lee’s distinct artistic style blends innovative comics storytelling with a classic visual aesthetic. Look no further than Marvel‘s Jane Austen adaptations for Lee’s unique artwork. With all of this in mind, it’s no surprise that McCann and Lee’s new team-up on Lost Vegas has received a lot of buzz on the interwebs, and I’m happy to say that this debut issue lives up to the hype!

In a spaceshell, Lost Vegas follows the (mis)adventures of a dapper, disreputable gambler named Roland. After an opening sequence that perfectly introduces us to Roland’s shyster-con-artist swagger, we discover that Roland is currently serving an extended sentence paying off gambling debts as an indentured servant on the intergalactic casino, Lost Vegas. From there, McCann takes us through this cross-genre world he’s creating. McCann blends sci-fi elements (extraterrestrial beings and image-inducer collars) with caper plot beats (the central heist storyline), but he never loses sight of introducing and characterizing his primary players in this first issue. It’s a complex world McCann and Lee are building in Lost Vegas #1, but they succeed on all levels.

Check it. Jim McCann and Janet Lee have already proven their masterful synergy on Return of the Dapper Men. While that buzz might get eyes onto this newest comic from Image, it’s the freshness of the storytelling that will keep readers on board. Lost Vegas is a genre-bending sci-fi heist comic that promises to accelerate and escalate quickly over the next few issues! And seriously, Janet Lee’s character design for Roland channels all sorts of classic ’50s-’60s American Golden Boy handsomeness. Definitely worth a look!