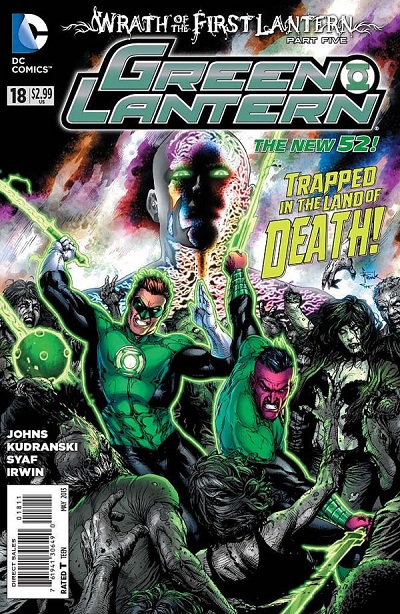 In the immortal words of glam-laureate Cinderella, ‘You Don’t Know What You Got ‘Till It’s Gone’.  While it is applicable in a slew of different situations, Green Lantern finds its relevance to the phrase this week in the arena of color.  For years, this series has built its foundation on the liberal, artistic, and symbolic use of color, and it comes as a stark contrast when reading issue #18 to find it almost entirely devoid of those vibrant hues.  But, without the base of color to build up from, can the newest chapter in Johns’ closing arc still bring the fun?  Well that depends on if you like drama or action.

Finally finding his way to the ‘displaced’ Hal Jordan and Sinestro, the previous owners of his ring, Simon Baz has to come to terms that maybe the people who preceded him are not as infallible as they seemed.  As Sinestro and Hal argue on the best options ahead of them, an all but forgotten friend on the outside does their best the rescue them.  But when only two can leave, how can they decide who stands the best chance against the First Lantern, and who gets left behind; and what options are available for the one that stays?

This is a setup issue that moves the pieces into play that Johns wants for his final act, but plays out in a much better experience than many of his other transitory issues.  The first meeting of Simon with his quasi-mentors plays out about as expected (read as: chaotically), with solidly rooted reactions to who these characters are.  While I was surprised by Simon’s actions, they are really walking a fine line with the character, and his wide array of possible responses to a situation are what is making him interesting.  Another item I can praise, is the pitch perfect pacing of the events that really build a sense of suspense in what is realistically a very small scene in the larger scope of things.  Using only a ‘musical chairs’ plot device, the story plays with expectations to make the buildup truly exciting, and the payoff/cliffhanger (*rimshot*) are quite satisfying for those who have been following along so far.

I am torn on how the art and the story work together though.  Don’t get me wrong, the work done by the entire art team is absolutely gorgeous, but mixing a mostly dialogue driven issue along with a distinct lack of color makes even the action that does occur feel flat.  As I stated at the beginning, it’s amazing how much color brings to this title, and having the majority of the issue in washed out greys seems to suck all of the life out of the story being told (*second rimshot*).  Again, this does not seem to be a problem with either portion on its own, as both the story and the art separately are great; it just seems to be the combination of the two together that plays a bit off.  On the positive side of things, it is astounding what Kudranski and the entire team are able to do with shadow work alone, and the meticulous detailing all involved bring to the table is beautiful to behold.

Buy.  I loved the story, and I loved the art.  I have a small issue with how they gel, but I know others at my LCS were quite pleased with the entire package, so that may be a personal issue on my end.  Johns fulfills his prophecies (*rimshot hat trick*) of an exciting conclusion, and is building to what we can hope will be an exciting payoff to his farewell arc.

Green Lantern Corps/Green Lantern: New Guardians #17 – Both great character studies, but only one needed for crossover based on preference of Guy Gardner or Kyle Rayner!

Wrath of the First Lantern: Second Round Scorecard!

Green Lantern #18 – Buy.  This is still where most of the action appears to be taking place, and contains a suspenseful story on its own.