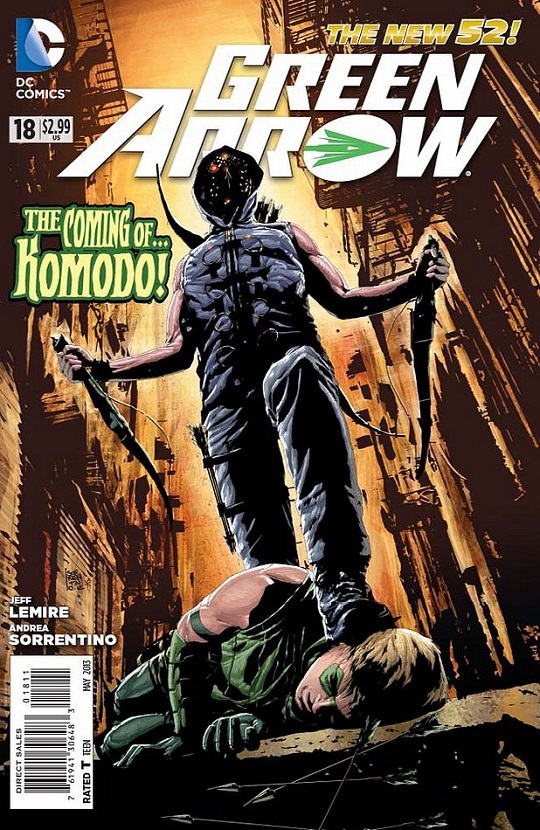 Last month saw Jeff Lemire and Andrea Sorrentino seize the reins of Green Arrow. Lemire’s first outing with Oliver Queen read like a number one issue might read; setting up a new status quo and building from the ground up. His second issue continues to build and expand on the previous issue, while digging deep into the Green Arrow mythos.

In the last issue Lemire was quick to throw Ollie into a world of sh- crap. His supporting cast was quickly removed and Oliver soon found himself on his own struggling to get a grasp on the dire situation. With issue #18 Lemire has begun to reconstruct Green Arrow’s support structure. The two notable additions are the somewhat mystical The Magus, and computer genius Henry Fyff.

The Magus knows more than he lets on, and is nudging Ollie in the directions he needs to be heading.  His motives are unclear right now, but ultimately this looks to be a tool that Lemire can use to force Oliver Queen in to character evolving situations. The Magus is also responsible for sending Ollie to Henry Fyff. The relationship between these characters is rather interesting as they both saw each other as “wasted potential,” but now they need to rely on each other.

Lemire continues to raise more questions throughout this issue, but as each new question arises we can see its connection to the overall story that is forming. The narrative in this issue gives us a look at both the actions of Oliver and the Komodo. I really enjoyed how Lemire did this. He gives us glimpses into who the Komodo is, but not too much. There is a severe lack of dramatic irony as we switch back to Oliver Queen. This isn’t a bad thing. It allows us to see what he sees, and enjoy watching the events unfold in “real time.” I like riding shotgun with the characters in my comics.

Despite not knowing Komodo’s plans, we can see that he has a mission, and is not someone to take lightly. In what I hope is an effort to show more connectivity in the DC Universe, Ollie phones up Steve Trevor to get some breathing room from local law enforcement. Oliver thinks he has friends in high places, but like The Magus says, Komodo has them in higher places. This is not an enemy Oliver can afford to underestimate, just like a real komodo. They aren’t simply large lizards. Even if you escape their bite, the infectious saliva will kill you slowly and painfully.

Sorrentino’s art continues to be phenomenal in this issue. His inking and use of shadows is great. I lack the words to do it any justice, as it always leaves my jaw open. Last issue there were some critics of the “Hawkeye-esque” panels of arrows. It’s still there this issue, but I don’t feel it as prevalent as it was before. Either that or it just doesn’t bother me like it does some folks.

Why would you not buy this? Lemire continues to build up a strong story and interest in Oliver Queen and his world. He’s tearing the Green Arrow down in order to build him back up again into something stronger. Lemire excels at characterization and creating characters we love to read. I can’t wait to see how Ollie and the rest of the (hopefully) growing team evolve and grow.