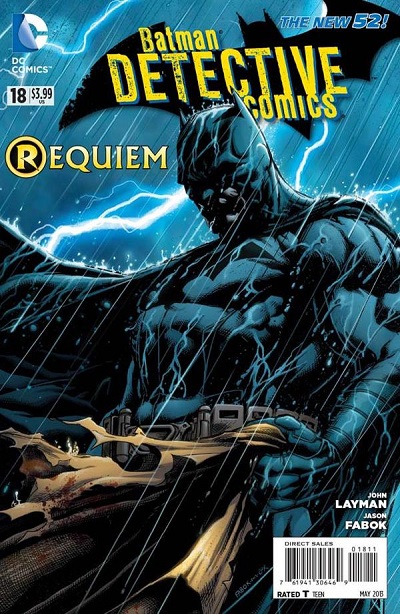 I do everything in my power to avoid spoilers to the books I read for enjoyment.  From dodging forum topics to skipping Previews, one of the most effective ways has always been to avoid the cover itself until release day.  So today, after last week’s major Bat-bomb of events, I was kind of surprised to see Detective Comics #18 in its full ‘mourning glory’.  Not because I didn’t expect to see some ramifications to the final act of Batman, Incorporated #8; but more to how it could fit into the story being told in Detective.  And after reading this issue it appears I was correct in my initial reaction, as what we get is a lackluster followup to the whole affair; but an absolutely solid next chapter in the story that has been told since Layman took over the title.

Oswald Cobblepot, otherwise known on the streets of Gotham as The Penguin, is finally able to break away from the Joker after being blackmailed into assisting with his maniacal schemes.  Thinking he can get back to his usual business affairs, he is rather rudely awakened when he discovers that his second-in-command, Ignatius Ogilvy, has used Oswald’s departure to take his money, his holdings, his operations, and even a variation of his name; proclaiming himself the new boss of the criminal underworld of Gotham, Emperor Penguin.  But how far will either man go to hold on to what they both believe to rightfully be theirs?  Also within, Victor Zsasz breaks free of Arkham during the Joker’s chaos and sets his sights back on the citizens of Gotham as we get a glimpse into what made him into the man he is today.

We’ve all been told time and time again not to judge a book by its cover, and this is the reason why.  While the issue overall is quite fun in its direction of in-fighting within the criminal underground, the least needed scene (that would have been edited out in almost any other scenario) is the one that is touted the most on the cover of this chapter.  Those looking to find the fallout, need not look here for that regard, as there are only a total of 7 panels referencing it that feel more out of place than enlightening.

While I am cognizant of the reasoning, I do at least have the luck to say that everything else about the issue is strong enough to at least warrant interest to those who picked it up based on the cover.  Layman has been having a field day since taking over Detective Comics with running Batman’s more ‘grounded’ rogues through the mixer to turn their status quos upside down.  The end result has been a fun tale of intrigue, complacency, personal drive, and constant gaming for position between all of the players involved, and has directly led to me being a big supporter of his latest addition to Gotham City with Emperor Penguin.

The work contributed by Fabok continues to excel in the detail he brings to both the fore and background of each and every panel.  His weakest point in this issue would be facial expressions though, as practically every head shot features a scowling face; but that may be more due to the events of the story than his quality of work as I have seen him shine in that regard previously.  Something he cannot be faulted on though is his directorial comprehension, as the scene transitions and execution of layouts bring a real cinematic feel to the story as it unfolds.  Overall, his work in this chapter is more than sufficient to support the story told, but falls just short in comparison to the great work within some of his previous issues.

Hrmm.  If you are interested because of the cover and the fallout from Batman, Incorporated, your dollars are best served elsewhere.  But if you want to read one of the better Penguin stories I have had the joy to read that focuses more on Oswald Cobblepot himself than his squawking persona, you cannot do much better than Layman’s run on Detective so far.  And that continues in this month’s issue.

Jump-On Point:  You can easily jump on here, but the beginning of this sordid tale has been broiling in the background since issue #13.