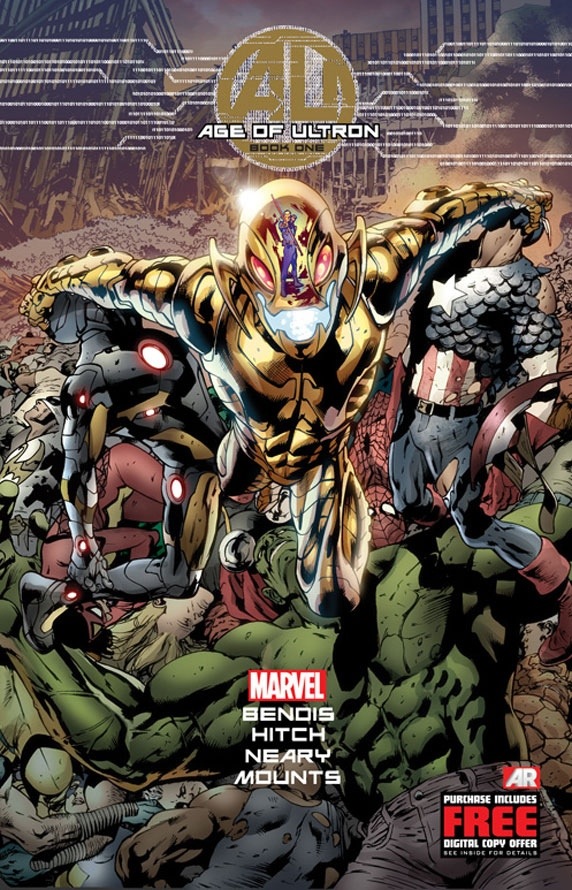 The apocalypse is here, and it is not pleasant.  Just how this dystopian future came to be, and how it will fit into Marvel continuity,  we don’t quite know, but we do know whose fault it is. Ultron, the deranged artificial child of Hank Pym, has returned and guess what? He’s all ready won. This is how the stage is set for book one of Age of Ultron and from the first moment we see Hawkeye put an arrow through a bad guy’s skull, we understand this is not the world of heroes we have come to know.

It might be easy to allow the bad taste of Avengers Vs. X-Men to color your excitement about the newest Marvel event, but that would be a mistake. If you aren’t a fan of violent, serious books you may want to look away, but Brian Michael Bendis and Bryan Hitch’s Age of Ultron #1, is an exciting, tensioned filled, and gorgeous comic book. One that gives us a peek inside the darker side of the Marvel U. Oh, and did I mention; the heroes are fighting a villain and not themselves!

Mr. Bendis has been planning this “swan song to The Avengers” for quite a long time, and everything about this issue feels tighter because of it. There isn’t a waisted frame, or redundant panel here, as Bendis uses both his dialogue and contextual storytelling to set the stage for the post apocalyptic world we are thrown into.

Age of Ultron doesn’t weigh itself down with a lot of expostional dialogue, or long laments from our cast of characters about the horrors that surround them. Instead, Bendis paints a picture of heroes pushed to perform unspeakable acts in the name of survival, friends mistrusting friends, and once proud men reduced to nothing more than quivering shells of their former selves. These big ideas are achieved in a compact and economical narrative, that seeps with tension and retains the feeling of some of the greatest post apocalyptic pulp tales.

All of this wonderfully grim storytelling is only possible because of the team effort between the writer and his artist Bryan Hitch.  Mr. Hitch’s visual storytelling is spot on and every inch of this book works to set the stage for the hell that is our heroes current world. From the destroyed New York, to the look of panic on the face of the criminals who think they have bought a pass from their robot oppressor, it’s Hitch’s interpretation of the story between the dialogue that sets this book apart. If there is anyone who doesn’t feel real peril and fear during the scene where the Ultrons surround the house Hawkeye is making his escape from, then I don’t think you know how to get lost in a visual narrative.

If Age of Ultron falters at all, it may be only in the reality that this is a story we’ve seen many times before.  A pinned down group of revolutionaries, with no hope and no course of action, making their last stand is not unfamiliar territory for a genre tale. However, lasting narratives are not always born out of uniqueness, but out of level of execution, and Bendis and Hitch stick this landing with aplomb. I would also caution new readers to not feel like you are missing something. I came to this having never read an Ultron story, and having read only a few scant issues of Bendis’ Avengers run, but I came away feeling satisfied with what I was presented and promised.

Buy It – If you are looking for a light, fun and fancy free adventure romp, you are looking in the wrong place. But, what Age of Ultron #1 lacks in whimsy it more than makes up for in sheer excitement and drama. The team of Brian Michael Bendis and Bryan Hitch work in perfect harmony to bring you the first chapter in a grim tale of lost hope and possible redemption. This is the type of story that would go great with a beer and a Hans Zimmer score and you won’t want to miss it.