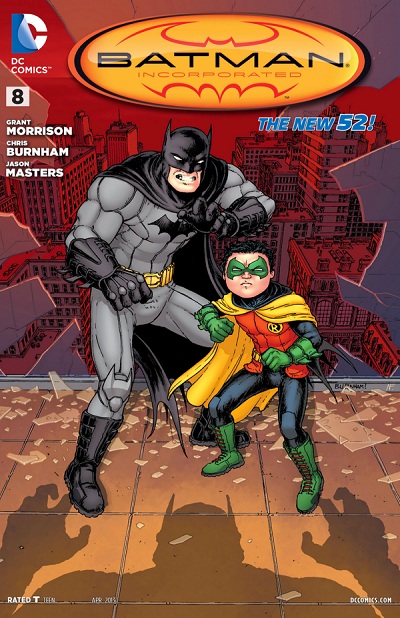 I’m well aware my efforts at this time are the equivalent of sticking my finger in the dike after the dam has already broke, but I am nonetheless going to try to keep this review as spoiler-free as possible while still discussing the book.  Besides, the talking points around this particular issue have circled around the final page and a panel; but how do the other 20 pages, or more importantly the issue as a whole, read in its entirety.  Well that, unfortunately, is just as complicated as the spoiler nature of the book itself, and will directly hinge on how much of the overarching tale you have consumed prior to reading this issue.

Batman has been captured, and the rest of the Bat-Family have been delayed by the forces of Leviathan; leaving only young Damian left to disobey Bruce’s orders and fly in to save his father and the day.  As the noose of Leviathan continues to tighten in its world-decimating plans, and with Damian interceding to assist his allies, can the Boy Wonder reach the main battleground in time to save the world?  And more importantly, is he strong enough to tackle all of the forces of Leviathan on his own once he arrives?

As I stated in the opening paragraph, I would almost have to write this as two separate reviews to give the quality of the experience held within.  For those who have not been following Morrison’s multi-year arc, there are still more than a few moments that play out almost perfectly if you know the characters involved, but the overall buildup, contextual clues, and impact of the issue will be greatly lessened.  This is not even going into the rippling impact this issue will have on the DCU as a whole though, so even those who have yet to read the rest will feel its ramifications for some time to come.  For those of us who have read the entire epic, or even dabbled in tangential New 52 titles, it is a gut-wrenching crescendo to what we have all been denying since the beginning and a fitting climax point to the story in its entirety.

I was unable to walk into this issue cold due to the overabundance of spoilers plastered on Twitter earlier this week, but even knowing the inevitable conclusion as I read through the issue did little to dilute the way these scenes have been strung together.  The dialogue between the various characters plays out as a grim, foreshadowing, yet heartfelt reminder of what is on the line; while the emotional resonance of the reactions to its outcome feel as painful and real as these fictional characters can bring.  While the initial plan of Morrison would have wrapped up this storyline much earlier, I feel the unexpected extension has done wonders to amplify the intended goal of his tale.

Artistically, Burnham’s style brings to life the gravity and action of this chapter as he has done masterfully in previous issues.  The bright, clean, yet hyper-detailed artstyle runs in a stark juxtaposition to the visceral action that takes place, but strangely fits in without feeling out of place.  And while the action scenes are run through with an immense attention to detail, just for the sheer number of panels in the battle even, it is still the facial expressions of the characters that steal the show.  This story, while focusing on the actions that people take, is really centered on the emotions it elicits; and Burnham appears to have understood that as his work was incredible in that regard.  Another thing of note, Nathan Fairbairne’s color work was nothing short of exceptional.  The gradual shading differences as the story takes place play a pivotal role in ramping up the suspense, and ultimately results, of the fight as it rages across the pages of the book.

Buy.  But buy for the right reasons.  If you are walking in completely cold to the book and its characters, it will be an okay read, and most of my praise will ring as hollow.  Because even though Morrison and Burnham have assembled an amazing chapter in their ongoing saga, it’s enjoyment will not be based upon the quality of the book, but instead by the relatability of the reader in this instance.

Jump-On Point:  I highly recommend not starting here, even if the rumors and spoilers have caught your eye.  While the #1 of the N52 Batman, Incorporated would bring you up to speed, I would deeply suggest starting with the Batman and Son TPB.  Barring that, the current or previous run of Batman and Robin would go far in getting the ambiance needed to take this particular issue up multiple notches in quality.