This past weekend at Wizard World Portland, I got the chance to sit down and talk comics with a lot of different people. One of those people was Joe Keatinge, author of the Marvel NOW series Morbius: The Living Vampire, as well as Image’s Hell Yeah and Glory.

Talking Comics: When you learned you were doing Morbius, what kind of mindset did you take when approaching that title? What all went into your creation of Morbius?

Joe Keatinge: My initial reaction was just…like crazy excited about it. I was a big fan of Spider-Man since I existed basically. There’s pictures of me when I was 2-3 years old with Spider-Man comics. I had a VHS tape of the old 60s cartoon that I’d watch over and over again. So I was predisposed to Spider-Man’s universe which of course includes Morbius. So I was really, really excited and I’ve read a lot of his stuff before.

So when it came to how to approach the series I went A: What do I like about Morbius and B: What hasn’t really been done with Morbius before? What I really like about him is sort of two-fold: One is that he’s an outsider; he’s not a villain, he’s not a hero, he’s just a guy who really wants to do better, or at least better himself because he’s constantly screwing up. It’s that idea of an addiction and having something you’re trying to personally overcome. It really resonates and I was like “I really want to try that for a while,” because one of my favorite comics of the last coupe years was Rick Remender’s Frankencastle run. I loved that stuff because he did such an awesome job with all that Marvel Monsters stuff. So I wanted to lay off that stuff for a while because it’s already been done before. I want to check out what Morbius is really like, what drives him. So my approach to the first storyline was “Who is Michael Morbius?” Not who is this vampire or whatever but who is Michael Morbius? He is a vampire but he’s also a scientist, a detective and a man. So what does that mean? That was my initial take on the first five issues. 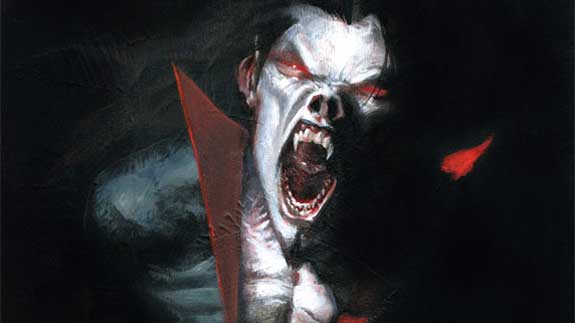 TC: What was it like moving outside of Manhattan to this more seedy area of New York. How much did the environment play into how you were writing the story?

Joe: It was huge. It was very methodical to set it somewhere else. Brownsville is a real place. It’s a really screwed up area and I just felt that if he was in Manhattan there would be two things: One, he’s a wanted man on the run so going to Manhattan which is filled with superheroes is probably not the best idea. The other thing is when I was doing my research I was considering a few different places but I chose Brownsville because I really think it represented him. Brownsville is an area that a lot of people have given up on. There’s no cops there and I really doubt superheroes would be hanging around there either so that’s how I came up with the idea to put Morbius in Brownsville instead of Manhattan.

TC: Working with Richard Ellison, your artist on Morbius, how did you take his art style into account with the relationship between the writer and the artist?

Joe: As an overall thing I…I never want to hand somebody a script and say “Just draw it.” I want to work with them and give them something they’d really excel at and enjoy drawing. Ellison has a very forward thinking style but it also has a very classic element to it. He’s one of those guys that I feel could exist in almost any era of Marvel comics. I feel he does human emotion very well so I played all of those elements into that initial Morbius storyline. But he’s awesome man. Rich is a guy who could draw anything. Read his Journey Into Mystery, it’s astonishing. I also wanted to do something a little bit different because I knew this’d be more of a grounded story. I wanted it to be less fantastic than Journey Into Mystery just to show him doing something else a little more gritty. TC: Moving away from your Marvel work onto you Image work, how did you come up with the idea for Hell Yeah in the first place?

Joe: Hell Yeah has been with me for a really long time in different forms. It was always sort of a loose idea, and then I’d have this grand idea to do this huge series of events but then I’d step back with it. It’s kind of my place where I could do whatever I want with it.

TC: Stylistically, what were you trying to go for with Hell Yeah?

Joe: It’s kind of a combination of things. I was raised in comics and I’ve been reading them my whole life starting in the early 80s, but the apex of me wanting to create comics was in the 90s. I was 10 years old and Spawn #10 came out, the Dave Sim written one, and I read that and was like “Holy cow, I want to write comics for the rest of my life.” That issue is all about creating comics basically, creator ownership and what that means so I was like “This is what I want to do with the rest of my life.”

So my aesthetic with Hell Yeah was to do something that was like half those 90s Image comics and the other half being 90s Fantographic comics and basically finding that middle ground between Love and Rockets and Youngbloods.

TC: On that note, what do you think is the main difference between writing something licensed with Marvel/DC and doing your own thing like with Image?

Joe: They’re both very fulfilling in different ways. I mean with Marvel I don’t own Spider-Man but it’s a huge amount of fun. I remember when Todd McFarlane drew him (Morbius) into his run on Spider-Man and I thought that was awesome. So it’s a character I’ve had an affinity towards for twenty years. So that’s where my love of the character comes from. With other licensed books I can pretty much do whatever I want because each book I do is a different type of experience. A Marvel book is a different kind of experience than a DC book or an Image book. That’s more of it for me. I just like trying different stuff in comics. TC: So what was your approach with Glory as opposed to books like Hell Yeah or Morbius?

Joe: Glory was the first work-for-hire thing I ever got. When it came to approach, it was the first book where I had a mission with it. I wanted to portray women the way I want to see women portrayed in comics. Frankly we get a lot of comics that portray them as this weird, over-sexualized, not even supermodel thing that was bizarre and they all talked the same. That’s not all comics but I wanted to bring something different. I wanted women who were chubby, women who were muscular, real women. One compliment I get a lot with Glory is that I have strong female characters and I feel like that shouldn’t be a weird thing, it should be the standard. I’ve had all these amazing women in my life: girlfriends, friends of mine, an amazing mother, an amazing step-mother, an amazing grandma, amazing aunts, cousins. I really wanted to do a comic starring a character that was a badass showing that anyone, male or female regardless of size, could be a badass.

TC: One last question. Besides Morbius and Hell Yeah, is there anything else you’re working on?

Joe: I have several things in the works at different companies. I have a digital series coming out through Monkeybrain with artist Ken Garing called Intergalactic. At some point Frank Cho and I are going to do a book called Brutal that’ll probably happen sometime in the next ten years. I’ve also got several things that aren’t announced yet but I can say, since I own them, that three of about six different upcoming things are at Image central.