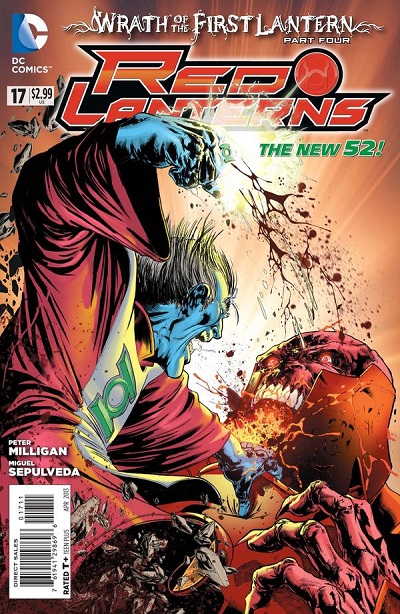 There’s something to be said for staking out your own little corner of the galaxy.  Sure, it may be a bit isolated, but we all know there are positives to almost any situation.  Take for instance, the freedom to do as you please, with minimal regard to the consequences or ramifications of your actions; a siren song for any creator that can turn those positives into a very alluring option.  In the case of the Green Lantern family of books, the title most apt to do so (in both story as well as execution) has always been the outlying Red Lanterns.  A part of, yet separate from the Green books in both tone and hue, the Red Lanterns have joined in on the inter-family crossover fun, but have always kept to themselves otherwise.  Now though, as we countdown to the end of Milligan’s run, as well as the climactic Wrath of the First Lantern crossover, has their isolationism harmed their participation in this event?

Accompanied by his newly-drafted ‘bironic’ forces, Atrocitus, leader of the Red Lanterns, continues his mission across the barren home world of the Guardians of the Universe in search of a treasure he knows is hidden within its fold.  Confronted by a ghost of his violent past during the search, will he be deterred from his goal by the rage that both drives and consumes him?  Or will Atrocitus be overcome by other emotions should his quest be successful; further weakening the rage-fueled general at the time that his strength is needed most?

Peter Milligan continues to write the Red Lanterns titles as its own entity, but as he accomplished in the Rise of the Third Army crossover that just ended, is also seeding major plot points that will take center stage in the event as it progresses.  It creates an odd dichotomy that feels both connected and isolated at the same time, which some may prefer in their crossover titles, but still comes off as odd when reading it in the context of part four in a larger story.  One thing that he continues to perform admirably with, is adding multiple dimensions and layers to characters that were, in my opinion, rather singular in purpose at the onset of this series.  Taking a step back, Milligan has guided these non-communicative drooling beasts, into fully-fleshed characters that are driven by more than just rage, and struggle each and every month with both the emotional and moral toll of their chosen path.  Quite the difficult road to say the least.  And while I am curious to see what his final thoughts are on the themes he has been exploring, it may prove to be even more difficult to finish off his solitary path while taking part in the bombastic interlinked events that are sure to be coming in the short term.

A direction of the title that continues to shine though, is the dark and graphic pencils of Miguel Sepulveda.  Deftly providing and displaying a range of emotion with only a raging monster and his mechanical cohorts as his canvas, Sepulveda continues to impress with what he is able to convey using only well-placed shadows.  With next month’s tease of the First Lantern using his mojo on Atrocitus, it will be sincerely interesting to see what Sepulveda is able to do when that canvas is broadened for him to work his own brand of magic in this usually overwhelmingly grim corner of the cosmos.

This one gets a split decision from me.  If you are looking for a jump-on point or just a singular Red Lanterns issue to read, I give this issue a pass.  If you are reading for the Wrath of the First Lantern event itself, I will state that this issue sets up a big game-changer for the coming chaos, so it may be worth checking out.  As I stated above, its isolationism has made it intriguing from where it can go on its own, but as this issue demonstrates, has also banished it to a place that makes the interconnected nature of its family feel more like a burden than a strength.

Green Lantern Corps/Green Lantern: New Guardians #17 – Both great character studies, but only one needed for crossover based on preference of Guy Gardner or Kyle Rayner!