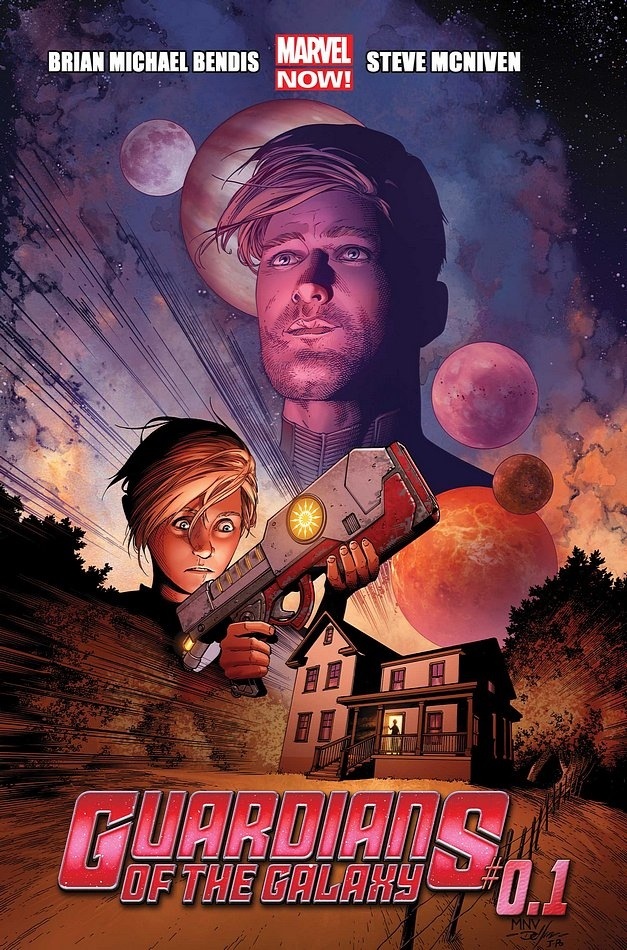 When it comes to the heroes we know best, Superman, Batman, Spider-Man, there is something taxing about an origin story. How many times do we need to see Kal-El sent away from the planet Krypton, or Bruce Wayne’s parents murdered in crime alley, before the powers that be realize we know these tales backwards and forwards? But, when it comes to those heroes who exist below the public consciousness there is nothing better than a satisfying introduction.

Marvel is positioning Guardians of the Galaxy as a centerpiece of their next phase of films and they have tasked Brian Michael Bendis with re-acclimating, not just comic neophytes, but grizzled veterans as to who this group of “Cosmic Avengers” are. Bendis’ first shot out of the gate is an expansion of his Marvel Now .1 short story into a full blown 28 page story. This Star-Lord centric .1 issue does a great job of filling us in on Peter Quill’s history and is drawn beautifully, but it has a few drawbacks that cause it to feel more like an optional prologue, and less like required reading.

Love him or hate him, Brian Michael Bendis has been using his distinct eye for character and drama to define, and redefine the Marvel Universe for over a decade. Bendis is a name that can sell a book and the fact that he is now turning that artistic gaze to the cosmic side of things bodes well for anyone who wants this interstellar resurgence to gain lasting traction. The writing in Guardians of the Galaxy #.1 is dialogue heavy, full of wit and relies heavily on character archetypes, in another words its trademark Bendis.

Where the book falters though, is in the innate nature of its narrative. This is an episodic story that features three different time periods, and although the pieces all work, the resulting whole is more information dump than anything else. In fact, I think all of this backstory would have been more effective if it was threaded throughout future issues of Guardians, rather than being all in this .1.

The biggest causality of this shifting narrative is young Peter himself, who comes off very bratty and not quite likable. This picture of him as young man then directly informs our opinion of the grown up Star-Lord, who doesn’t seem to have outgrown the chip on his shoulder. Peter has a few moments, specifically once fracas in a school yard, that points toward better things, and I trust Bendis to develop this character and this story. However, for right now I’m left wondering if this issue truly needed to exist.

The best thing about Guardians of the Galaxy #.1 is the dual tone being set up for its universe. The initial meeting between Meredith Quill and J’son has an old school romantic feel, and although it asks you to buy their relationship without a lot of backing, I found myself eating it up with a spoon. It may be because there isn’t a lot a straight romance in the current line of superhero comics, but whatever the reason, I found it a refreshing and idealistic look at two people finding each other. When we meet up with the Young Peter the tone shifts to one of adventure and danger, which gives the title a welcome Star Wars/J.J. Abrams Star Trek feel. So, even if I don’t love this first issue, I think that this bodes incredibly well for the series to come.

One thing that cannot be disputed is just how beautiful Guardians of the Galaxy #.1 looks. Steve McNiven’s characters have wonderfully expressive faces, that convey everything from viscous anger, to the slightest look of dismay and it makes the people in his panels come alive. McNiven’s art is also wonderfully detailed, from said characters, to the backgrounds to the bits of wood that go flying  in an explosion. Big props also have to be given to colorist Justin Ponsor who brings a dynamic pallet that perfectly incapsulates the varying moods of the book.

Wait and See – There are some truly special elements at work in Guardians of the Galaxy #.1, Steve McNiven’s art is tremendous and I trust Brian Michael Bendis to deliver a great series, but the overall effect of this Star-Lord prologue is lost among a narrative too big for its own britches. However, I think the future of the Guardians still remains incredibly bright, and I look forward to the themes of fatherhood, revenge and justice the book is promising.