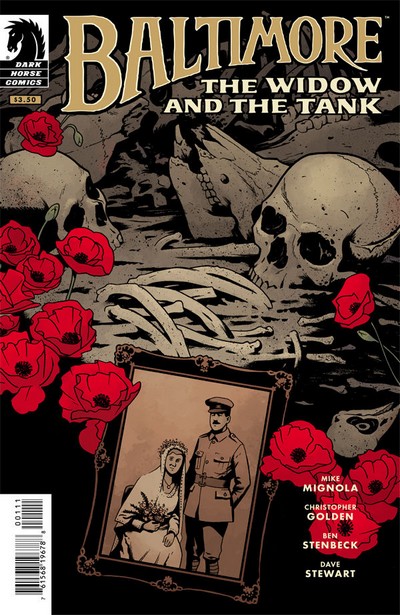 Baltimore is a series of one shot issues that focus on a vampire hunter, Lord Henry Baltimore. This book contains two short stories of his adventures, The Widow and The Tank. Mike Mignola has a loyal following in the comic book crowd for a reason: he knows how to put together a story that marries spooky characters and humor perfectly. I will say the adventures of Baltimore don’t contain quite the giggles that Hell Boy does, but it’s still clear that Mignola never takes his horror too seriously to come off as stiff and dry.

The Widow is a dark tale of a soldier’s wife who appears to be grieving the loss of her husband in the war. When Baltimore shows up on her doorstep inquiring about rumors that her beloved has returned home, she shoos him off, declaring him rude to insult her husband’s honor. Although you can’t help feel some pity for a woman who’s heart yearns for her love’s companionship, it is clear that she has traded her honor for comfort. Well, a cold comfort.

The Tank is a particularly clever story about a small town with a big problem. An old tank has been left behind in a field and the locals believe that a vampire occupies it and has slaughtered not only cattle but many children as well. Baltimore investigates and finds the old war machine littered with signs of death. Although a blood sucking creature hiding out, waiting to snatch the town’s babies seems terrifying enough, Baltimore soon learns that the vampire is not the only villain lurking here.

Verdict: Buy it. I believe pretty much anything created by Mike Mignola is worth space on your bookshelf, but Baltimore: The Widow and The Tank is a great, gothic horror book. With unmistakable artistic style and direct but effective story telling, the tales of Baltimore are very nice, classic creepy additions to any horror fan’s collection.