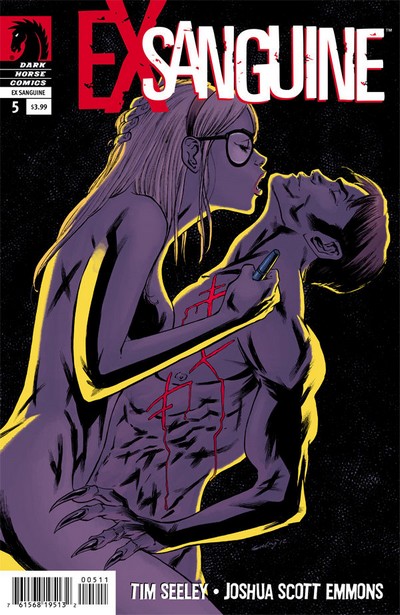 Ex Sanguine concludes with Ex Sanguine #5; mysteries are solved and love is bruised. Saul, the brooding vampire is hurt over the recent murder of a long time friend and love interest. Ashley the serial killer with a special ‘thing’ for writing in code is angry that her hard work is being copied and the media doesn’t see the copy cat. The FBI agent with serious mental tweaks caused by a traumatic experience in her past has officially spilled her marbles and is prepared to do anything to pin the murders on Saul and expose his true, monstrous nature.

As I’ve said before, this story has felt sloppy at times and this wrap up issue is no exception. I’ve always enjoyed Tim Seeley’s Hack/Slash series, but that one is made of many short stories with no real guts besides one girl’s past and how it drives her to kill. I get what Seeley was going for with Ex Sanguine, a more complex love story with a murder mystery as it’s backdrop, but unfortunately I think this series ultimately fell short in too many places.

The love story is sweet enough. Ashley comes off as fairly devious, but often irritating in her obsession with Saul; she repeatedly whines to him about wanting to join him in immortality. Saul is an interesting character, a vampire that holds to some folklore laws of his kind, but obviously debunks others. His solidarity and longing for companionship feels genuine, his intelligence and calm demeanor make him as likable as a monster can be.  My only issue with Saul is his ability to move from place to place in some kind of magic smoke cloud (taking Ashley along for the ride when needed) always felt very silly. The FBI agents are decent characters, although it was pretty clear from Issue #1 that Quinn was always intended to go bonkers and lose sight of her duties when faced with her own personal turmoil. Basically, Ex Sanguine has been a mixed bag of readable personalities and goofy story details. I hung in there to the end, but can’t honestly say I was excited about the package as a whole.

Verdict:  I’ll stick to my previous suggestion that this is an ok series to check out, digitally. It does not, in my opinion, carry enough weight to be added to a collection, but works as a fairly entertaining filler between reading your favorites. It was a respectable shot at something different for Tim Seeley, but whether being limited by it’s own plot devices or by a five issue expiration date, Ex Sanguine does have as many flaws as it has charms.