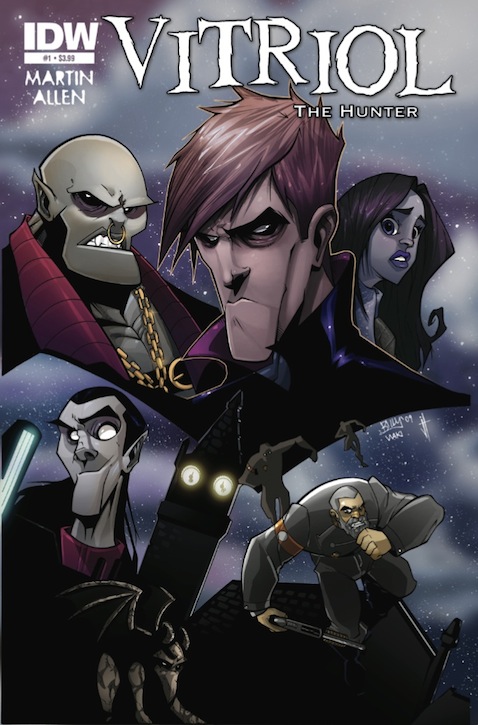 If you are a fan of the band Good Charlotte, then you may be familiar with their lead guitarist Billy Martin. To the best I can remember, I have never heard any of Good Charlotte’s music, but from interviews and press leading up to Vitriol’s release it is clear that is a project of passion for Martin.

Vitriol is a story set in a near-futuristic, gothic, vampire infested city. The main character, Vitriol, feels it is his mission to clean up the city, because his corrupt father is responsible for bringing the vampire’s into the city. There are a few extra details I am glossing over, but that’s because I don’t feel they really add to the story.

In this day and age there are a lot of stories to be told about vampires. With books like I, Vampire and American Vampire on the shelves, creators writing vampire stories really need to bring a truly original story with engaging characters to the table. It is obvious Martin and Allen are trying to build up an intriguing world, but the dialog and narrative come off very stilted and forced. The story and more importantly the characters don’t unfold naturally.

Martin definitely has a more cartoony style to his art, which I found confusing. I felt he was trying to build a darker, somber story, but the art feels like this should be an airy story with more silliness. Combined with the story it wasn’t working for me, but on its own I can appreciate the work put in. (I really dig the cover!)

At $3.99 this is a pass. I really hate to say it, but in my opinion this first issue feels like one big cliché. Perhaps it is because this is another tale of vampires. Without any impressive characters to draw the reader in, it was hard to connect with the book.