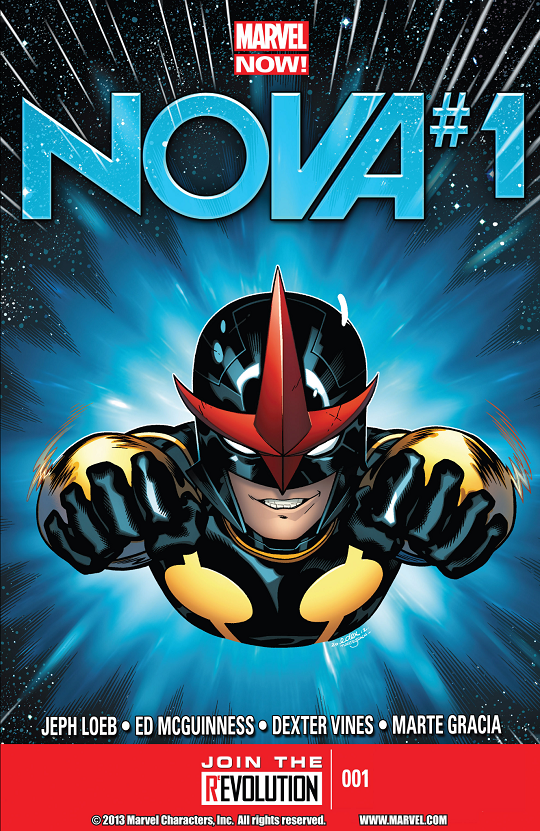 Nova is one of the Marvel Now! titles that will be showing us more of the universal aspect of Marvel. The Nova Corps are a sort of intergalactic police force, and this issue opens with a flashback to one of their rescue missions seventeen years ago. Actually, this entire issue is a flashback to before Sam Alexander becomes a member of the Nova Corps, but that’s okay. His appearances so far have been brief, and we don’t know a whole lot about who he is.

Jeph Loeb provides an emotionally filled introduction into the life of Sam Alexander and his family. Sam’s dad, a former Nova corpsman, appears to be a dead beat dad. He tells his kids stories about his grand adventures in outer space, which Loeb uses to balance some of the more somber tones with more buoyant action. These stories featured other members of the Nova Corps as well as some of the Guardians of the Galaxy, so there is some indication that these two series will have some interconnecting stories, locales, or characters.

The tone I got from this book was something similar to Tim Burton’s Big Fish. The blend of action and camaraderie complements the more emotional story of Sam’s disappointment and disbelief of his father. Loeb writes a nice heart-string pulling scene between Sam and his sister mid-book that really shows that even though he is angry and upset with his father, Sam does pity him. There is the realization that his dad may be a dead beat, but he is trying to inspire his children through his fantastical stories. It gives his sister something to dream for. At the core this looks to be a book about family.

The whole art team really delivers on this issue. The line art from McGuinness is superb, and I have always loved Dexter Vines inking. Maybe it’s because we both hail from Atlanta. The different perspective angles vary from panel to panel. It gives a nice glimpse of the surroundings and transforms the two dimensional art into something three dimensional in our heads.  I’m not sure if this was in Loeb’s script, but the backgrounds are always full of stars in either the sky or posters on the wall. It’s almost subliminal.

Buy It. Nova appears to be a series with family at its heart and is going to take us out into the Universe and away from earth. If something like Fantastic Four is your thing, then gives this a read. Often times a first issue will have the main character appear in costume on a final splash page. Instead Loeb wraps up this issue with a surprise visit from some old friends, which should definitely want to make you come back for the next issue.