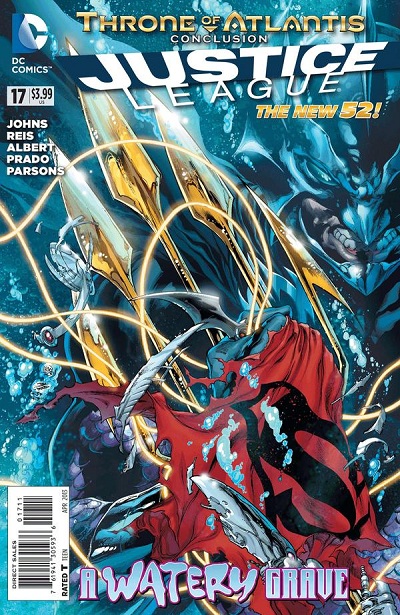 The ending.  The most criticized portion of any storytelling medium that has the power to make the previous drull work sparkle if performed correctly, or drag the promising bulk of the setup straight into the ground with poor execution.  With the end of the Throne of Atlantis storyline coming to a close in this issue, a lot was riding on the landing to show that the Justice League title had finally found its stride.  And while the landing was muddy, the unclean nature of it just may be exactly what the title needed to do.

Atlantis has marched upon the shores of Boston after a mysterious naval accident launched military ordinance straight into the domain of the undersea people.  Standing between their hordes and the inevitable destruction of the eastern seaboard are the newly expanded ranks of the Justice League.  But with a third force entering the fray at the behest of the puppet master who orchestrated the entire conflict, can Aquaman make the tough decision between his friends on the surface, his family of the sea, and the role he may be forced to play in either world?

Having run through the entirety of the Throne of Atlantis crossover here, it would be less than truthful to say I was not a little worried about how this entire storyline was going to play out after my praise on the previous three.  Luckily, Johns looks to have found his groove with this collection of DC’s greatest heroes; allowing their inter-relationships to drive the story as much as any outside antagonist, and bringing the book back to the core of what sparked it.  Seeing all of the big personalities interacting with each other, and facing threats too big for any single one of them to tackle alone.  I’m not sure if he has hit a critical mass of what he wanted to build as his backdrop, or simply reached a point of character establishment that he wanted to get to before taking the title in this direction, but it is certainly a sight for sore eyes to see this title climbing back up towards the top of what it should be.

The ending presented is not without its faults though.  With a crescendo of violence as full-on war breaks out, the resolution is almost a quiet whimper in comparison to tie up most of the loose ends.  To be completely honest though, the messy landing is what has me even more excited for the title than a storyline that could have ended with a neat bow.  No character escapes the consequences of this storyline without a little dirt on their hands, and the varying shades of grey that the protagonists and antagonists alike find themselves operating out of lends a complexity to relationships that have been very one-sided in the past.  All in all, a satisfying conclusion, and a veritable garden of future storyline seeds are contained within the path chosen.

The artwork provided by Reis and Pelletier continues to be both bombastic and endearing as the story demands.  While there is the tiniest shift in tone at the breakpoint between the two contributors to this issue, I was more impressed by how closely they synced up than I was jarred by the sudden switch.  It is faintly noticeable at first, but the tone remains and flushes out any misgivings that the usual mid-issue artistic shift does for me.  Reis truly shines in his large, over the top depictions of the chaotic battle scenes; meticulously adding detail into even the most jumbled mass of armies.  Meanwhile, Pelletier finishes off most of the issue by focusing instead on the personal and emotional tolls that the battle has taken on everyone involved, and adds pathos to these characters to great effect.  The crossover has made me a fan of both, and completely blasted my horribly misplaced concerns on Pelletier taking over Aquaman from Reis.

Buy.  This storyline looks to be the turning point for the Justice League title; giving it both the spark of personality, as well as a direction and sense of purpose that has been sorely lacking in previous arcs.  With a final page tease hinting at a short-term goal for the League, the time may be finally upon us where the threads of the DCU start to weave together as a universe, and the Justice League titles take their places as the tentpoles of that setting.  And at the very least, this issue was a fun start towards that goal.