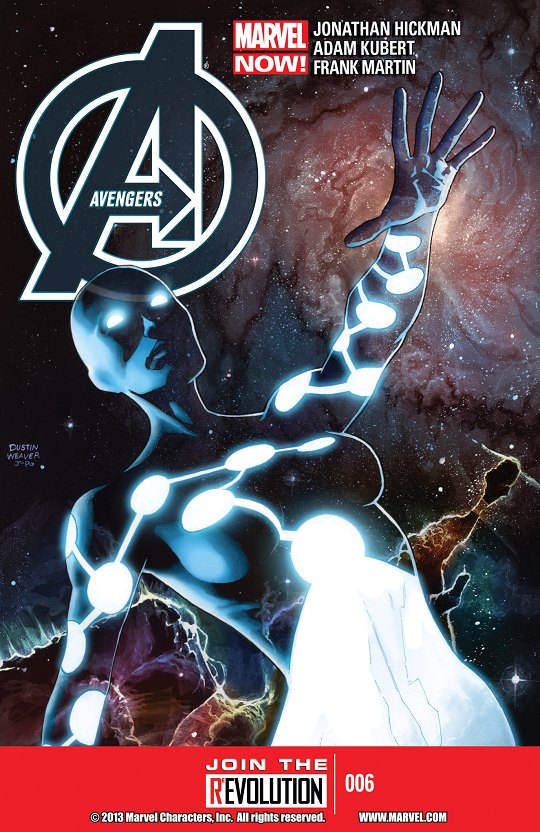 Carl Sagan famously said, “We are all made of star stuff.” Every atom in our bodies is the same stuff you find in stars. We are all from the celestial soup (or mass) that forged the universe, and that is how we are connected with everything else in existence. Captain Universe and Shang-chi’s opening discussion in Avengers #6 begins with an extension down this same line of thought.

Such deep discussions about our place in the universe are intriguing and are definitely playing a role in the story the Hickman wants to tell. Shang-chi wants to help Captain Universe’s host, Tamara Devoux, remember who she is. The serious universe talk is relevant, but serves as more of an ice-breaker between the two. We also find out a little bit more about why Captain Universe was mumbling about pie back in issue #3. For those that have been critics of the heavier nature of the book, then you will be relieved to know that issue #6 breathes a lighter tone.

Sunspot and Cannonball also make appearances in this issue, but we don’t get to learn too much about them. They are more there to be the source of Spider-Man’s (Doc Ock’s) annoyance. I liked how Hickman wrote Spidey in this issue. He had Doc Ock making a few Parker quips to maintain appearance, but still showed him being a total ass.

I enjoyed this flip between the serious conversations and the fun coworker-friction scenes. It worked well, and Hickman was able to tie it altogether by the end of the issue. We are even left with a pretty big cliffhanger; something we haven’t seen in several issues. It’s seems like next issue will take a break from the more one-and-done hero introduction issues we have had recently. Let’s hope we get to see all these “new” faces playing bigger roles when the larger story resumes in the next few issues.

Adam Kubert’s art in this issue is well done, but Frank Martin needs to get some love for some great colors this issue. There is one page in particular that has Captain Universe sitting on the carpet, but the background has become filled with stars and the galaxy; blending her in with it all. I found it to be pretty awesome.

I’ve enjoyed all the art in Avengers so far, but the frequently changing artists is one of the things that bothers me with the double shipping books. I’m looking forward to Opeña returns to the pages of Avengers, but with Dustin Weaver taking over next issue, it seems I’ll have to wait a bit longer. Nothing against the other guys, I just dig Opeña’s art a lot.

I would have to say this is a buy. We get an issue that continues with the heavy, serious tone of the book, but we are also given some fun scenes with Spidey-Ock. The character introducing one-and-done aspect we have had the past few issues seems to wrapping up for now. We can look forward to some big story stuff from next issue. Hickman also provides us with some information on the last page that will allow us to go back and maybe find some hidden easter eggs in the previous issues.