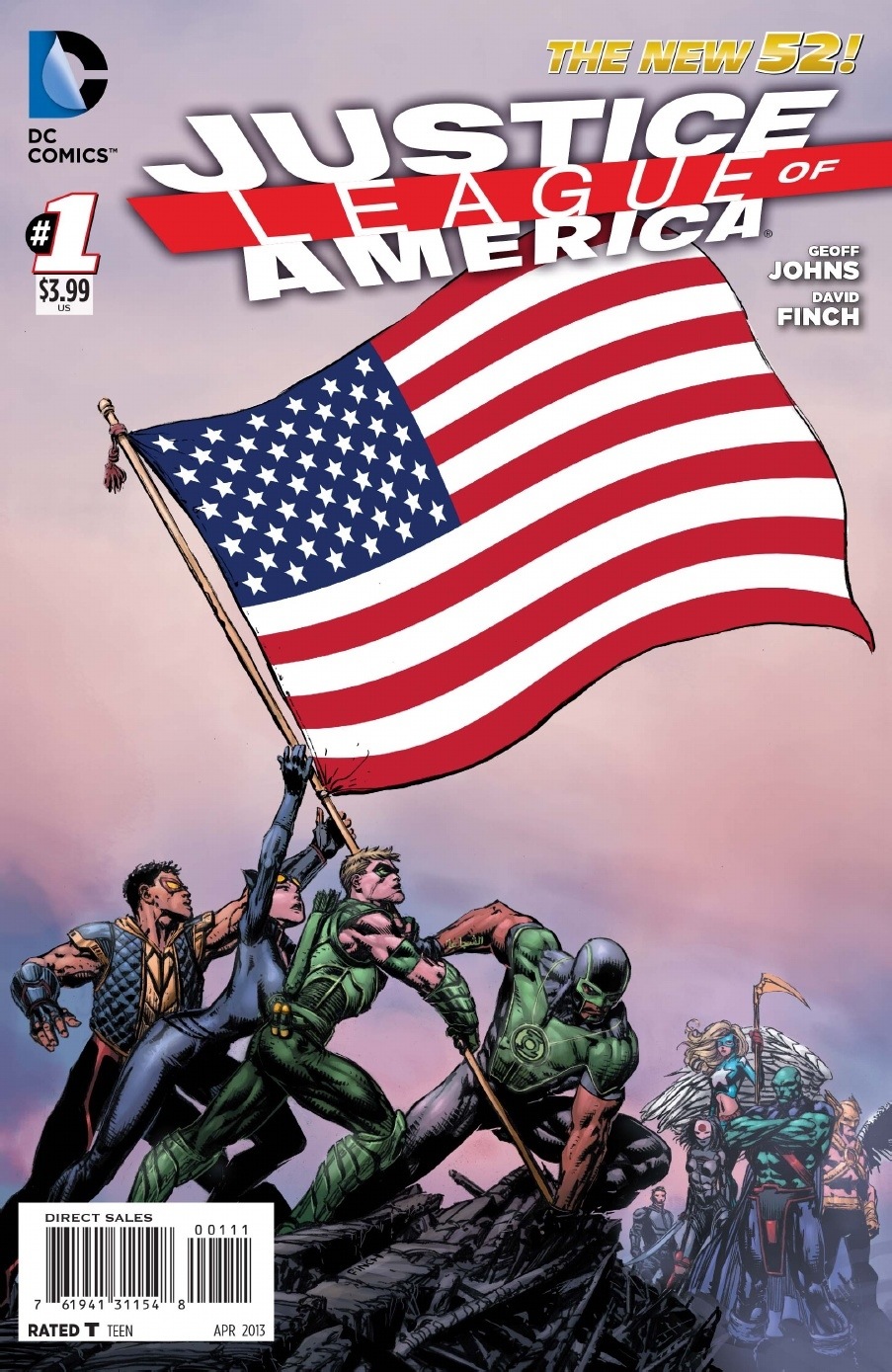 A few weeks ago on the Talking Comics podcast our good friend, and sometimes co-host, Rob bemoaned the loss of the old interconnected DCU. He made the point that each of the various heroes and villains felt segregated to their own titles, and that when they did crossover into other books, that it felt odd and ill conceived. DC has been in need of a comic that unified their universe and gave the events of their earth (whichever one it is now) some franchise spanning ramifications.

Who better to take on this task than Geoff Johns, the man who reshaped Green Lantern into a series with one of the deepest mythologies in all of superhero comics. Now, with Justice League of America #1 Johns, along with artist David Finch, has taken a great first step, not just to create a new status quo for a single character, but for an entire universe.

The first thing that stands out to me about JLA is its cast of characters. Catwoman, Hawkman, Martian Manhunter and (until issue 17) Green Arrow are all venerable characters who have been mishandled in the New 52 relaunch, and Katana, Vibe, and Star Girl are either returning to the universe for the first time, or have been mostly ignored up until now. This, at first glance, is not the A-list group of heroes you’d choose to headline one of DC’s flagship titles. But, those who know Geoff Johns, know that he works best when he’s molding ill used characters rather than all-star ones, and that’s as true here as it ever has been.

We get only a scant few moments with the members of this new JLA, but even in that little time I already feel the awesome power of Hawkman more than I ever did in his series. Then there is Martian Manhunter, who in Johns’ hands is a majestic, powerful and dangerous force who crackles with intelligence. Finally, Catwoman, who for the first time in the New 52, outside of her appearance in the Gail Simone Batgirl Annual, is alive with not just sexiness, but with wit and charm as well.

To simply include all of these character introductions Justice League of America #1 would have to be a hefty read, but the title also has the task of conveying to us why this team needs to exist in the first place. The result is a dense, substantial feeling issue that sets in motion a series of complicated events and character motivations that we don’t yet fully understand. Johns keeps all of this pipe laying from collapsing on itself by placing Steve Trevor and Amanda Waller’s initial discussion of the JLA as a the supporting framing device. It’s a savvy move and it allows the reader to never lost among the deluge of new people being introduced. For those worried this book would feel superfluous you can belay those fears, this is great superhero storytelling.

David Finch, who has mostly drawn Batman since he arrived at DC, hits all the right notes in regards to the fight scenes in JLA. His characters are a little too muscle bound for my taste, but that is more than made up for by his ability to tell a story through action. His work lacks the kind of subtlety, in both movement and expressions, that counterparts like Greg Capullo and Ivan Reis excel at, but his work is still a beautiful thing to behold.

Knowledge of the goings on in the DCU is a plus, but there are only a few off hand references to the events happening over in Justice League. So, if you are interested in big superhero books and comfortable taking the leap with some characters you don’t know, this book should be welcoming to you.

Buy It – The idea of a government team being put together to combat a possible superhero threat is not a new one, and neither is the concept of a bunch of volatile anti heroes coming together to save the day. However, an old story can feel new again when the right scribe gets his hand on it, which is exactly what appears to be the case in Justice League of America #1.

Geoff Johns has assembled an intriguing, underused, and under-serviced group of characters into a team that appears to have its own unique niche in the DCU. This is a great start to a series, an effective #1, and, if Johns can do for the Justice League what he did for the Green Lantern and Aquaman, we are in for a great ride. Oh, and also I could take an entire book of David Finch Hawkman art, no words, just starling renderings of the cop from Thanagar. So, get on that DC.