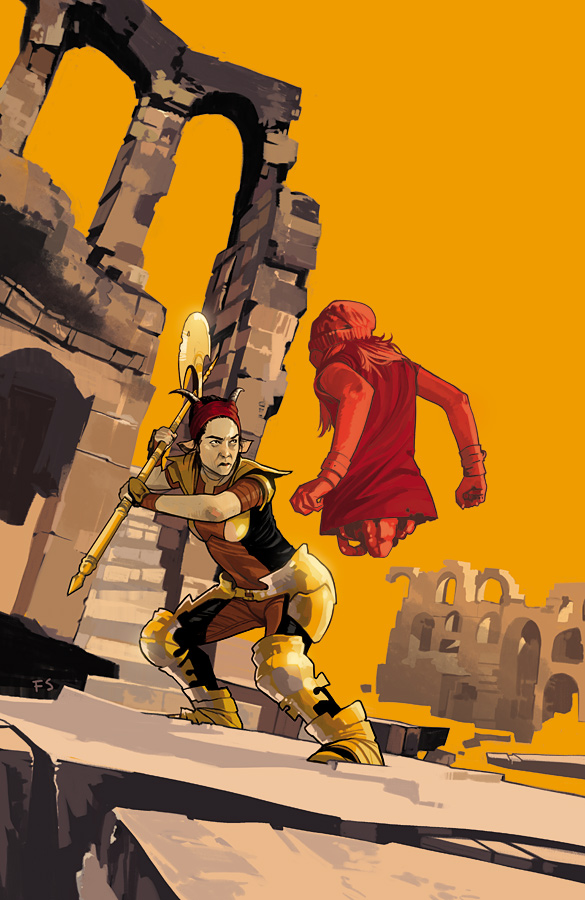 Some issues have the power to draw you in quick and keep you coming back for more. Vaughan demonstrates his capacity for storytelling in issue 10 of Saga from the first panel to the last image.

Saga opens up with Marko and Alana before her defection. While Marko, who is in captivity, lays tracks, Alana reads out loud from her romance novel. Readers get the sense that these two have developed a friendship through shared interest and kindness. Given the opportunity to talk with Alana, Marko shines as a likable ladies’ man. Hazel, as she narrates, makes note of her father’s ability to entice women, including Gwendolyn. Gwen, still scorned by Marko’s abandonment and betrayal, continues to track Marko and Alana using the Slave Girl’s unique talent and The Will’s resources throughout the galaxy.

While Alana and Marko’s father have a heart-to-heart onboard the ship, Marko and his mother continue to look for Izabel planetside. The giant they took down mentioned something about the planet getting ready to hatch. The aforementioned hatching results in something far more terrifying than any other creature our heroes have encountered.

Vaughan keeps his writing up to par with Saga #10. While it is not an exceptional issue compared to others of the series, it stands head and shoulders above most comic book material available on the stands today. Vaughan manages to make readers root for the bad guys in this issue while keeping our focus on the well-being of Marko, Alana, Hazel, and her grandparents.

It pretty much goes without saying that Saga is a series that demands your attention. Vaughan and Staples are the standard for writer/artist team-ups. Their combined talent makes a story of this proportion work. Issues #10 is a difficult jumping-on point, but there is no reason interested readers can’t catch up by buying volume one and the remaining issues through their comic book shop and ComiXology.