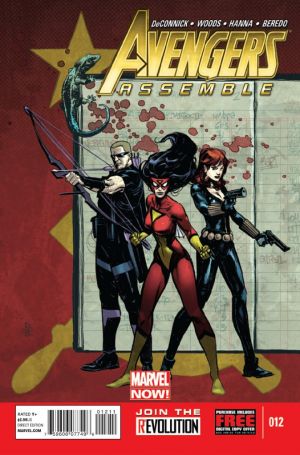 Natasha has loads of bad karma. It comes with the territory of being a world-class spy. She recognizes her past deeds, and has promised to restore her good name and help those she’s hurt the most. In the past, Natasha murdered a man named Anokhin, a chemist behind a dangerous compound. Knowing the pain she’ll cause to this good man’s family, she pulled the trigger.

Now, Natasha must make up for that pain caused. A marker indicating her debt to Anokhin’s family has shown up, compelling Natasha to visit Siberia. Of course, it wouldn’t be an Avengers title if a few heroes didn’t find a way to tag along. Hawkeye invites himself along, and Spider-Woman argues her way onto the small team.

Avengers Assemble might as well be called Spider-Woman and her amazing friends. After years of being a B-class Marvel hero, Spider-Woman is getting some great panel time. For readers of just Avengers Assemble, it may be difficult to get a grasp on her personality. She shifts from compassionate friend to slightly paranoid girlfriend and hits everything in between. In a word, Jessica wants to be included. She wants to be accepted by her teammates, which makes this mission to Siberia that much more important to her.

DeConnick’s dialogue suits each of the three Avengers. Natasha’s inner monologues reflect the business-like assassin that she is, and the playful banter between Clint and Jessica is perfect for a super couple. The weaving between the arguments Clint and Jessica have and the dangerous mission at hand is flawless as well as entertaining.

You’d be doing yourself a disservice if you didn’t jump in on this issue. One of the biggest selling points of Avengers Assemble #12 is that readers don’t need background knowledge on any of these characters. DeConnick lays out all the necessary information without dragging anything out. Woods’s artwork is clean, simple, and makes for a great comic book; he can convey so much underlying emotion with a single panel. Avengers Assemble is a comic book series well suited for both the hardcore Marvel fan and the new comic book reader.