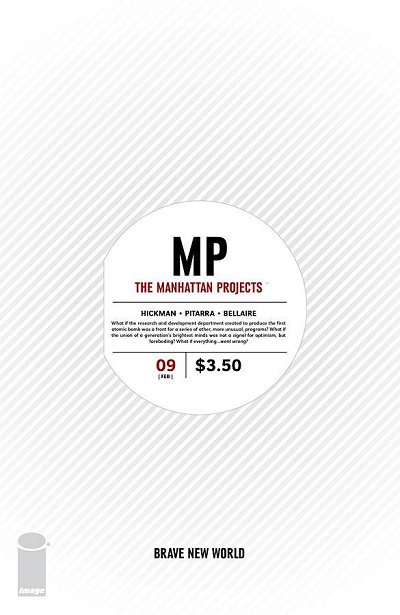 Last month, I mentioned this quirky (understatement of the year) title as one of my favorite books that I had run across, mostly due to its bizarre storytelling combined with its surprising pathos.  This month, Hickman clears the decks with the finale of his latest historically insane arc; closing out the conflict between the scientists of the Manhattan Project and the secret organization that cannot stand their independent free-thinking ways.  Of course, with Einstein on a rampage, Dahglian roaming around with an itchy trigger finger, and a gun-toting cosmodog on the loose; odds are not in the favor of peaceful negotiations.  But, as Russian cosmonaut Yuri Gagarin even states amidst the mayhem, ‘Science is happening’!  And science is so very good.

After last chapter’s assault on the Los Alamos installation by the FDR artificial intelligence at the behest of its Illuminati masters fell short of taking out the scientists, both groups are now locked down inside the complex, with only the chance for one side to leave a victor.  Hunting their world-controlling prey through the corridors of Los Alamos, the research team, alongside General Leslie Groves, decide to use their secret pact with the Russian research team to their advantage; playing the governments of both sides in an effort to finance their future endeavors, and possibly supplant the puppet-masters they even now are trying to kill.

Like a brief moment of lucidity in the middle of crazed fever dreams, either this issue was one of the easiest to follow or my brain has been permanently damaged by the previous absurdity and it is all just making sense now.  Hickman continues to deliver a comedic and fantastic story in this chapter, as his dialog shifts to take on a more ‘men of action’ oriented portion of the arc without losing any of the charm and humor that have made the characters fun to follow to date.  Even more impressive in this particular closing to the Illuminati storyline, is how bluntly yet effectively he has set the stage for the next portion of his tale; giving a hard ending to the arc while throwing open the curtains to boldly state their next stop on the journey of science.  It’s a solid ending that had me quite psyched to see where they can go from here without a clear agenda to focus all of their crazy.

Pitarra continues to provide the only art I could see accompanying this bizarre story, creating a cartoonishly visceral backdrop that bounces back and forth between playful and grotesque.  As stated in last month’s review, the pervasive feeling of unease still accompanies all of the silliness, creating this feeling of duality to the story that gives each twist and turn that extra bit of punch as you look at both sides of the equation.  Stylish and effective, the only thing I can compare it to in recent times would be the Superjail shorts on Adult Swim.

Caveated buy.  I’m quite aware that The Manhattan Projects is not aimed at everyone, but those that do find purchase in its lunacy will find a fun and engaging story contained within.  Like a meticulously planned stream-of-consciousness, it is similar to a child telling a story with its loose grasp on logic; but backed up with the firm understanding of a skilled writer and a solid framework to hold all of the insanity together.

Jump-On Point – Issue #6 marks the quasi-start of this particular storyline, but it is a jump in at any point and learn to swim type of book.