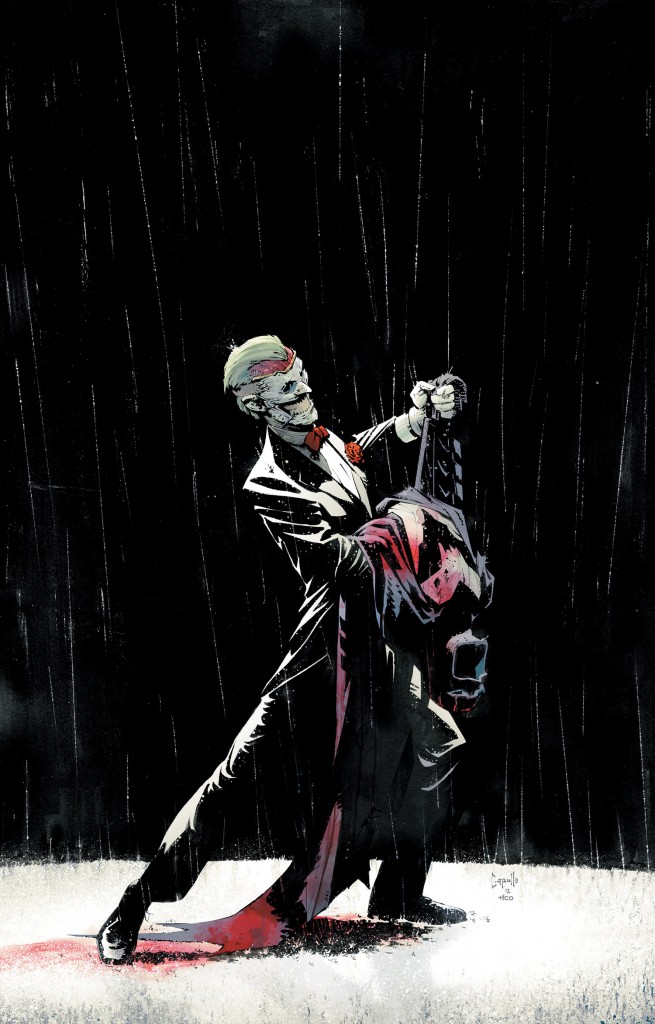 I have taken great care to not ruin any of the major plot points in Batman #17 during this review. I ask that any commenters please refrain from posting spoilers in the talk back section and instead head over to our Batman reaction page and post them there. Thank you and enjoy the review!

So, what is Batman #17?  I know one thing it isn’t and that’s great. Great, is a term in the age of the Internet that has lost a lot of its meaning. We now use it as a facsimile for “very good” and that being the case, I can’t use it when describing Scott Snyder and Greg Capullo’s Batman #17. Instead, I’ll use another word, one that may seem too big or even hyperbolic, and that word is genius.

Few writers have the talent or vision to even attempt the kind of large scale stories Scott Snyder has undertaken in his first 18 months writing Batman.  Even those who do have the skills to sculpt something this grand usually end up with a piece that starts great, but never quite pays off.  Snyder had a whiff of that with his Night of the Owls conclusion, but here he does the hardest thing to do in all of storytelling, he crafts an ending more satisfying than the tale’s beginning.

Everything about Death of the Family, from the Joker’s design to the bone chilling narrative, has been unflinchingly brutal and yet it has also been uniformly excellent in its execution. We have sat in wrapped attention as Snyder played on our deepest fears, our most secret desires and dared us to guess about how his trip into Gotham’s heart of darkness would play out.  From the beginning of this macabre tale Snyder promised us a conclusion that would shatter the Bat Universe, and for those worried, or perhaps hoping, this proclamation was all talk, trust me its not.

Yet, the truly amazing thing is not that he changed the status quo, but in fact how he did it. This is a story with consequences that will be felt not just in future stories, but in the very way characters interact from now on. It’s an ending that needs to be read multiple times and one that will be debated about for a very long time.

For the past five issues Scott Snyder has chilled me with his words, but its the art of Greg Capullo that will truly be burned into my brain for weeks to come. Capullo’s Joker, with his face steadily decayed from starkly white to a sickly green, his smile ripping at the seams, and his eyes crazily protruding from their lids, has been the thing that literal nightmares are made out of. Love it or hate it, it’s a depiction of the Clown Prince of Crime that you will never forget.

Capullo excels at these over the top visuals, but he is also working at an incredibly high level when it comes to the smaller moments. Reading the book for the second time, I was struck by the subtlety of Dick Grayson’s expression when he pleads with Bruce to go after the Joker or even the look of malice in Batman’s eyes when he finally has the villain in his sights. It’s staggering work that is the highlight of Capullo’s time on Batman.

Buy It – If Court of Owls was about the power of history then Death of the Family has been all about identity. Who we pretend to be, who want to be, and who we really are. Why did the Joker remove his face? Does he know who Batman and co. really are? Does he even care?

Scott Snyder and Greg Capullo have done what very few creators have ever done, stick the landing on a series with impossible expectations. In fact, they achieve this feat by taking those expectations and completely subverting them with a powerful, scary and yet subtle conclusion to their examination of the Joker.  By focusing on personal relationships and true consequences Batman #17  is the example fo what all event should strive to be.