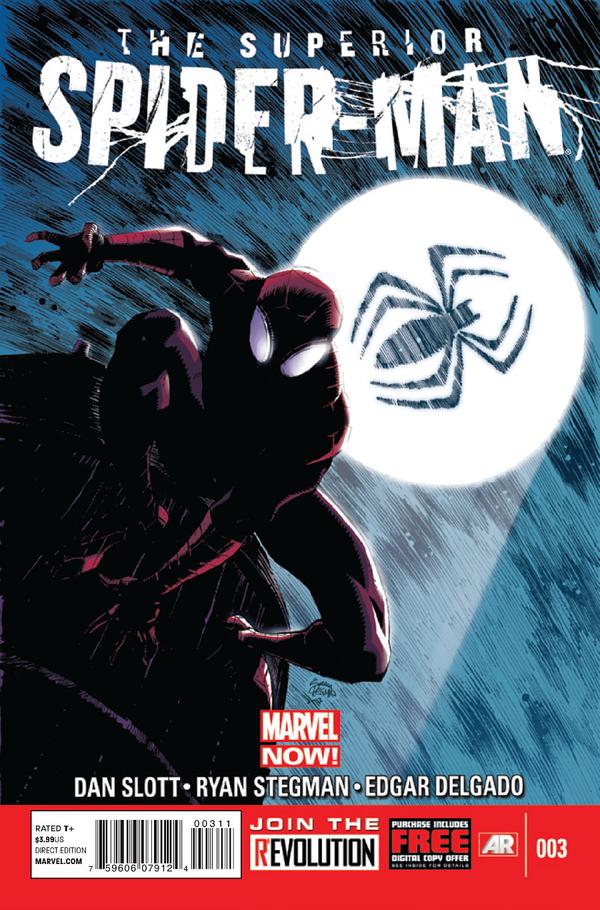 Something is off about Spider-Man. He’s more cold, calculated and distant than Peter usually ever was. Despite that, nobody really seems to notice except for Peter’s ex-girlfriend Carlie, who had a strange encounter with a dying Doc Ock who claimed he was really Peter Parker. Because of that encounter, Carlie has become wary of this “Superior Spider-Man” and thinks something might be up with him. While all this is going on, “Peter” is hunting down the returning Vulture, who recently attacked Mary Jane in her club.

Dan Slott has set up some really interesting threads in the overall story, and it’s really making Superior Spider-Man an interesting read. Looking at Otto’s past, whether as a child or during the early years of his time as a villain is intriguing, and there’s a huge pay-off halfway through that really had me starting to care about Otto and my confidence in him being a good superhero. The only big issue I had, and it’s one that feels slightly ironic given the situation, is the ghost of Peter Parker. Most of the time all he does is complain, whine and judge Otto for doing things differently than how he did it. Sure there are a couple moments where I remember why I liked Peter, and him going into Otto’s mind was definitely a plus, but I’d really like the book to focus more on Otto and less on Peter.

Ryan Stegman and Edgar Delgado are still on art duties and actually have a few really bright moments art-wise. For the most part the art has been solid, if not unremarkable, and acts more for the writing rather than on its own. That’s not a bad thing by any means, and it’s a skill that takes a long while to learn, but nothing has really jumped out to me until this issue. The action and panel to panel transitions are wonderfully handled, especially since it’s mostly aerial in nature, and there a few close-ups that really shine, as they help augment the emotional weight of a few of the scenes.

Superior Spider-Man is definitely a step in the right direction for the series. Spider-Ock is starting to grow on me as we get a closer look into the life of the man formerly known as Otto Octavius. While his personality is still jarring, we’re starting to see hints of a true hero underneath and I appreciate that he wasn’t always a dastardly, evil villain, even after he became Doc Ock. The original Peter Parker’s consciousness began as an interesting twist in the series but is slowly becoming one of the things I really don’t like about the series. I’m hoping that he can be better utilized in the future, but he needs to shape up quickly. Ryan Stegman and Edgar Delgado continue to do a solid, if not unremarkable job, although there is a few shines of brilliance to be had. I say get it if you’re interested, it’s worth the four dollar price tag.