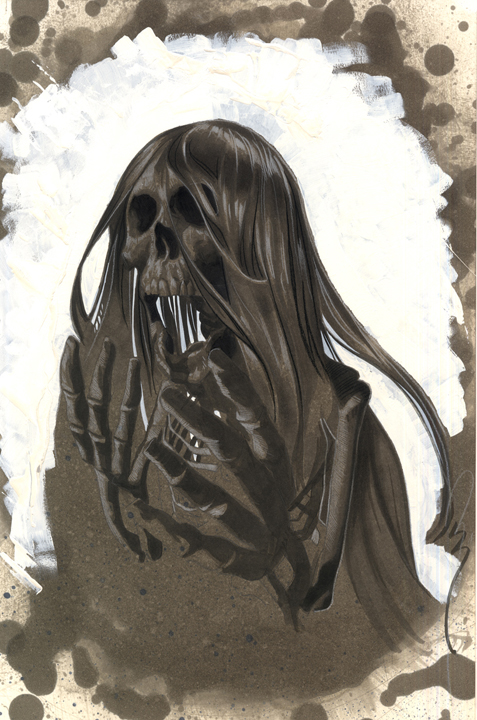 Rapunzel has had a rough time lately. Mayumi has hunted down Rapunzel and Joel, ready to unleashed decades of pent-up anger at perceived injustice. When things start look hopeless, the past rears its ugly head to turn the tables.

Beukes blends the history of the Hidden Kingdom with present-day Japan. Rapunzel’s trauma at the bottom of the well results in a desperate escape; bezoars made from her own hair and fear mixed with magic act as extensions of her body. Faced with death, Rapunzel uses the bezoars to attack, strangle, and mutilate the army out to kill the Japanese fables.

Fast forward to present-day. As Mayumi tries to kill Rapunzel, the bezoars reappear. Tomoko’s prisoner, Jack, looks like he’s on death’s bed. Bigby and Totenkinder make a trip to Japan, and Totenkinder reveals her interest in the Japanese fables.

The Rapunzel arc of Fairest has been a great story. Fables arcs that show the history of a character have always been enjoyable. The biggest appeal to the Fables comic books is the alternative background to the characters we’ve known for years. Rapunzel is not just a damsel in a tower; she is a fighter, loyal to her friends and lover. In previous arcs, we’ve explored Aladdin and Briar Rose and learned a secret about Beauty that came as a total surprise. As this arc draws to a close, the future of the series is looking promising.

While issue #12 isn’t an ideal jumping on point, it brings another piece to the Hidden Kingdom arc. Rapunzel’s reaction to being pushed in a corner is horrific, but is fitting to the situation. Beukes is weaving a great addition to the Fables series.