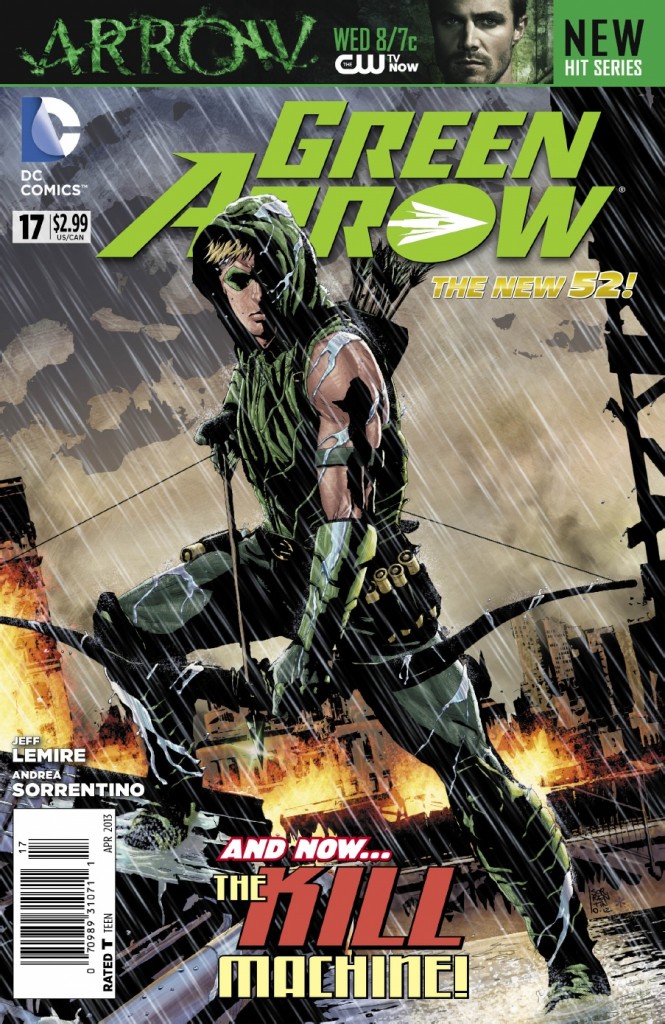 Who is Oliver Queen? Is he a Bruce Wayne clone, a crusader for social change, a reluctant killer, or is he, as the New 52 has portrayed him, a mashup between Tony Stark and Steve Jobs? The conundrum of the character is he is all of these things, and so, in an odd way, he is also none. In fact, outside of his ability to wear a little hat and shoot arrows very well, Green Arrow is the biggest name DC superhero who lacks any kind of cohesive identity. However, one has only to look across the street to Marvel to see how a once maligned archer can, with the right creative team, ascend to the ranks of critical darling in a short time. So, enter rising stars Jeff Lemire and Andrea Sorrentino, who are tasked with once again making Oliver Queen a vital part of the comic book book conversation. The team’s first foray is here, and I’m happy to report that, although Green Arrow #17 is still working to separate itself from its sub par past, it is brimming with great ideas, a fresh new direction and stunning visuals.

Jeff Lemire, who is best know for his wistful independent work and surprisingly family centric run on Animal Man, brings a fiercer and less sentimental style to the plate in Green Arrow. Lemire puts his foot on the gas from the get go tossing our hero headlong into an action packed mystery in which he is completely over matched. There is no globe trotting in this book, no wiz bang gadgets and above all there is no glamor. Oliver’s world is not cushy, in fact its dirty and tough, and this street level view is exactly what the book has so desperately needed.

This grounding of our hero makes the big things at work behind the scenes in Green Arrow #17 even more tantalizing. So, if you are a sucker for flashbacks, hanging plot threads, mysteries of identity and mythology, trust me you are going to eat up this narrative with a spoon. There is, of course, the danger of a character getting lost in all this plot, but Lemire avoids this pit fall by giving our hero some great inner monologue. It’s well executed device that allows the book to keep its fast pace, yet also makes it a deeply internal tale. It also allows Lemire to welcome in new readers who may have avoided the series up until now.

This is a good jumping on point, but make no mistake this does not feel like a number one. It’s the title’s one downside because it still seems somewhat shackled by the mediocre 16 issues that preceded it. Lemire is a fantastic writer, and I have a feeling he will treat this the same way he dealt with Justice League Dark. With that book he started out with the same tone as the prior run, and then gradually transitioned it to be fully his own. He’s all ready done more here then he did in taking JLD and I imagine in a few issues we won’t even remember the Krul/Nocenti issues existed.

Andrea Soreentino’s style is painterly, almost abstract, and much of the time it seems he renders the idea of a scene rather than a literal depiction of it. This type of work seems tailor made for the gothic, fanatical craziness of a book like I, Vampire, but at first glance it would seem like something that would need to be changed when tackling a traditional superhero book. Well, it just goes to show you that it’s a good thing I’m not in charge of major creative decisions, because Sorrentino manages to transport his style perfectly to the emerald archer. A lot of what Lemire is doing in the book deals with the upheaval of the status quo and that is hammered home by the surreal nature of the art. I feel the confusion when Ollie feels it, but I also feel his focus, his anger and his determination. This is evocative, beautiful work and it’s a welcome change up from DC’s usual superhero style.

Buy it – Green Arrow #17 is a book with a ton of promise. Writer Jeff Lemire has set Oliver Queen on the right path to becoming a major player in the DCU and he does so by taking him down to the streets. This is a gritty, tough treatment of the character and it not only feels like new territory for Green Arrow, but for Lemire himself. There is some danger in having a villain with the same skill set as the hero, see the Iron Man films, but I have a feeling Lemire is going to use him to really show off the way he is shaping the Emerald Archer. You mix that with a healthy dose of mystery, mythology and gorgeous Andrea Sorrentino art and you’ve got one of the most intriguing books in the New 52.