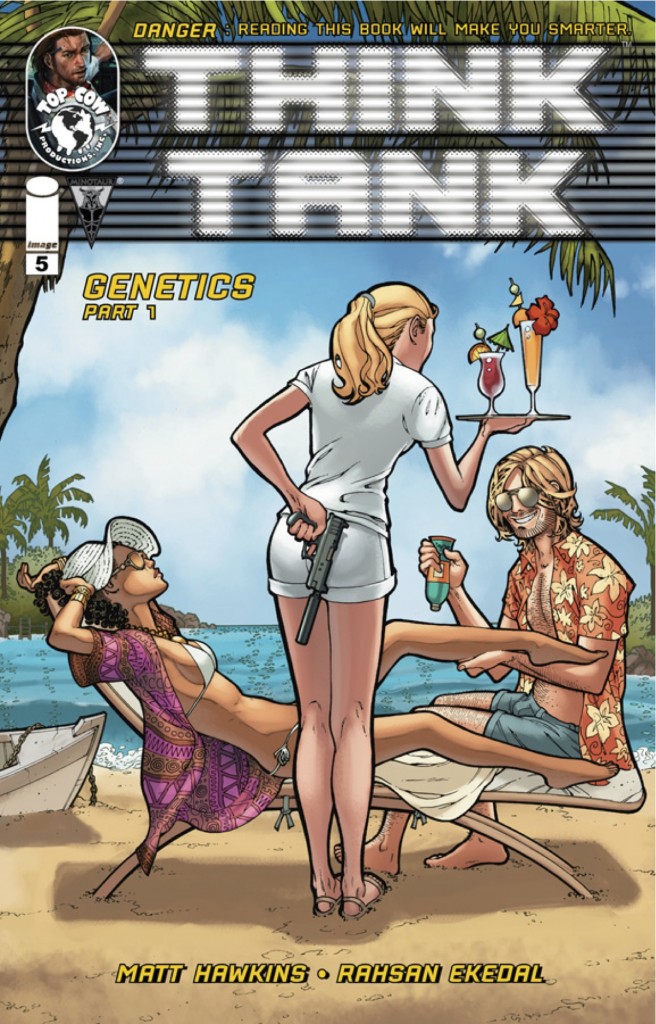 All this, PLUS SCIENCE!

Here’s a life lesson: Any book with a prominent “DANGER: Reading this book will make you smarter” disclaimer on the front cover is definitely worth a look. With a story-arc title like “Genetics” and an ensemble cast with more Ph.Ds than the CVS on Harvard campus, Think Thank aims to make science as hip and now as any superhero-spy-zombie-gore-romp. After reading this issue, it’s safe to say that the disclaimer on Matt Hawkins and Rahsan Ekedal’s Think Tank #5 becomes less of a warning and more an uber-entertaining promise.

Think Tank was originally intended to be a four-issue mini-series from Image Comics. After a critically acclaimed run earlier this year, creators Matt Hawkins and Rahsan Ekedal received the daunting task of continuing the military-scientific escapades of Dr. David Loren despite issue #4’s relatively definite ride into the sunset. Hawkins decided to employ a two-month time jump with issue #5, allowing for a fresh status quo as well as a mysterious two months of missing (and waiting-to-be-addressed) plot points. Thankfully, Hawkins provides a concise one-page recap of the first storyline before launching into “Genetics,” so I won’t go too much into the background here. As a new reader, I was glad to be able to jump into the story with all the prior knowledge I needed on the very first page.

Issue #5 sees our “hero” Dr. David Loren propose and work on a controversial weaponized virus that targets specific gene-codes. During the initial four issues, Loren was apparently presented as a wunderkind inventor disillusioned with the immoral goings-on of General Diana Clarkson and the US military. His two-month escape from and subsequent return to the Think Tank is at the core of the intrigue and mystery underlying the techno-lingo and lab-time of this issue. Hawkins also deftly reintroduces each of the major players, their background, and their interrelationships through the action of the story rather than through heavy-handed exposition. It’s all really well-done, and it provides both the perfect jumping-on point for new readers as well as tons of new fodder for returning Think Tankers to chew on until next issue!

Check it out! Matt Hawkins’ script runs the gamut from political intrigue to Star Wars references to underground secret military lab-chatter. After the main story, Hawkins takes the time to provide external links and informational excerpts that reinforce and contextualize the science in the book itself. And, to top it all off, Rahsan Ekedel’s black-and-white artwork is absolutely stunning. The naturalism mirrors that of other Image books like Morning Glories and Saga, despite the grayscale color scheme. Definitely worth a read! Especially if you want to learn something.