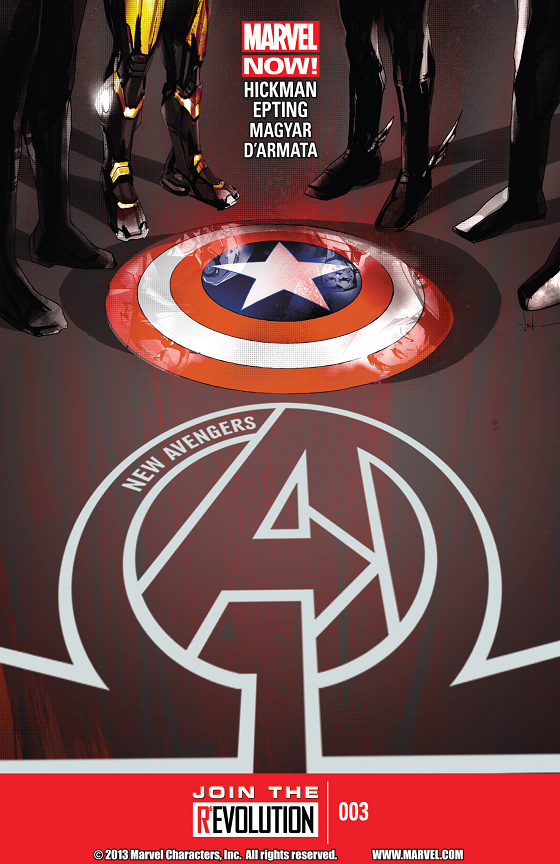 There is a lot going on in this issue of New Avengers, and it almost ends in the same way as the previous issue. In fact, good old Captain American points that out towards the end of the issue. If you don’t remember how issue #2 ended, let me refresh your memory for second. Captain America is uncompromising on taking any means necessary to stop the destruction of the galaxy; he will not let the Illuminati destroy one world to save others. I did say the issue almost ended on the same note, but the final few pages bring an interesting end to the issue. The ending isn’t totally unexpected, but I was a little surprised to see these events unfold so early in the series.

The heroes have decided to attempt and use the Infinity Gauntlet to stop the incursions of one Earth crashing into another. With Professor X dead, they are left without the Mind Gem. Within the first few pages the heroes have already used the other gems to locate it and its new owner. Hickman expands the cast of New Avengers with the induction of the gem’s owner into the Illuminati. It’s too bad there isn’t any crazy Animal House style initiation into the Illuminati. For a secret club that includes Tony Stark that is a big disappointment! Jokes aside, I welcome the new member and feel they will add a different perspective to the moral predicament that is at the core of this book so far.

If you haven’t read issue #3 yet, then you might think that the Infinity Gems and their combined result, the Infinity Gauntlet, feel like a convenient plot tool to simply sweep this problem under the rug. I was pleased to see that Hickman took these powerful tools out of play early on in the series in a surprising way, but at the same time in one tiny panel he leaves a window open for their possible return (or the entrance of something else). New Avengers is not a book about the most powerful heroes smashing and crashing. It’s a tale of morality. Heroes often have to make difficult choices, but how far should they take those choices. The idea of the Illuminati is itself a moral conundrum.

Hickman continues the conversations between Reed Richards and the Black Swan in this issue. On one side of hope we have Captain America and on the other we have Black Swan. The rest of our heroes are stuck in between. I got slight shivers down my spine when her words to Reed earlier in the issue were used as the closing narration; a very nice call back and parallel.

The art team hasn’t changed since the last issue, and my opinions of the art haven’t changed in the past two weeks. I really dig on Steve Epting’s pencils, and this issue doesn’t disappoint. And how about that awesome cover from Jock, again! I didn’t even notice the reflections in Cap’s shield when I started the issue. Amazing!

Buy It. New Avengers is still getting started, but things are starting to ramp up. The depth of the character discussions continue to provide a deep intellectual level to superhero comics. I’ve read through this several times already, and it has sparked a lot of thoughtful reflection and contemplation. This isn’t something you get from every book. If you still haven’t check out New Avengers then jump on before the express trains gets started and doesn’t stop to let you on!