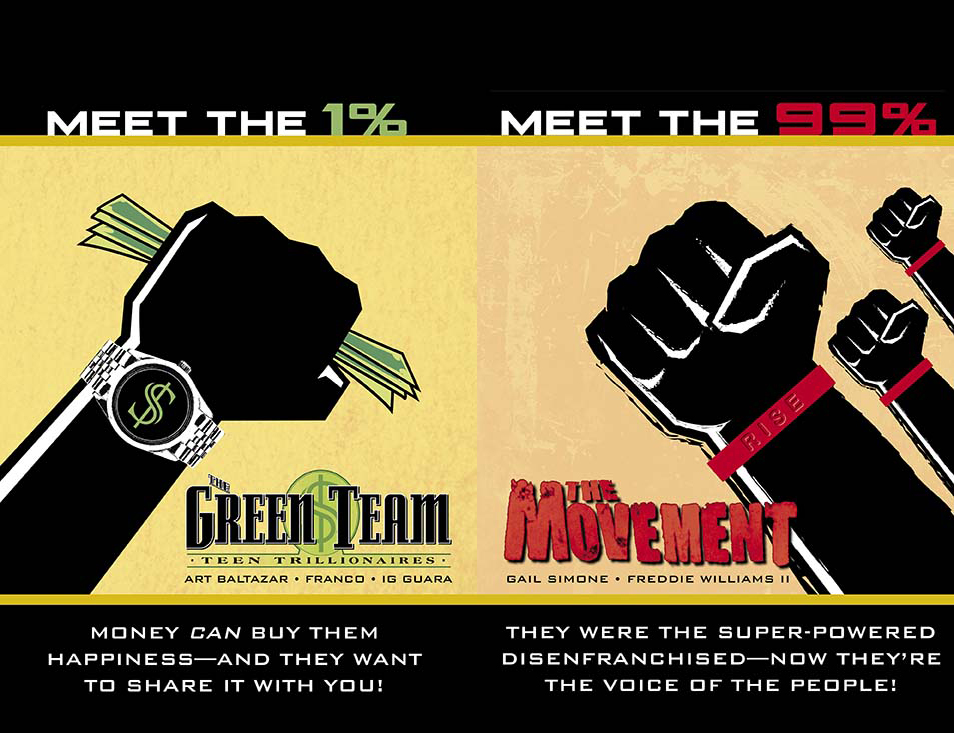 Amidst all the news about cancellations and creative shifts that have happened today over at DC, two new titles were announced for this May: “The Green Team” and “The Movement” by Art Baltazar and Franco and Gail Simone respectively. Both titles are politically driven books that deal with both sides of the current economic situation. “The Green Team” deals with the 1% (the really rich) and “The Movement” deals with the 99% (the rest of us). Franco, Art and Gail sat down with Big Shiny Robot and had a lot to say about their respective books.

This will be the first time Art and Franco have worked with DC. What got them the job and what is this title all about?

“DC knew we were the right team for the job. They knew our sense of humor would be an important element of the book but they also knew we could bring the story that would make this something people would want to read. Intrigue, young love, money and even these superpowered beings that inhabit the world. I looked at the original designs and concepts of these characters and was looking forward to giving them a major update. This gives us the chance of making older, obsolete characters relevant …and awesome in the new DC universe. We also had certain pop culture and social media references and questions that we wanted to bring up…when we started to talk about what these characters looked and acted like if they were around today what would that be and the answers and stories wrote themselves, it was our job to type them up in script form and send them in.”

But what’s the major theme of the book? What is the message they are trying to send?

“The real question is: Can money buy you anything in the DC universe? Would it make you powerful? Can it make you a hero? Can money make you…Super? If you had unlimited wealth, could you use that to make the lives of people better? Would you help your fellow man? Would you buy powers? You need to read this and find out.”

On the other side of the coin is “The Movement,” which Gail Simone has been working on for some time.

“The Movement is an idea I’ve had for some time. It’s a book about power–who owns it, who uses it, who suffers from its abuse. As we increasingly move to an age where information is currency, you get these situations where a single viral video can cost a previously unassailable corporation billions, or can upset the power balance of entire governments. And because the sources of that information are so dispersed and nameless, it’s nearly impossible to shut it all down. I’ve been in countries where the internet is heavily censored, but they can’t possibly keep up with millions of users from every corner of the world. The previous generations of superheroes were not created to address this, it’s a legitimately new frontier, both for the real world and for storytellers. The thing I find fascinating and a little bit worrisome is, what happens when a hacktivist group whose politics you find completely repulsive has this same kind of power and influence…what if a racist or homophobic group rises up and organizes in the same manner? It makes you wonder where the next battlefield will be.”

While the subject matter is more serious and politically driven than what we’re used to from Gail, she assures people that her trademark sense of humor will still be a big part of the book.

“I think the themes are pretty meaningful and compelling as drama, but even firefighters and soldiers have that gallows humor. There’s some darkly funny stuff, certainly. It’s an adventure story, but it really isn’t about mad scientists and jewel heists, it’s more about the injustices that can affect real people’s lives, just tarted up in costumes and superpowers. Many of the best revolutions had a pretty decent wit to them, to be fair.”

But what made her decide to work on a book like this? What does this title bring to the table that we haven’t seen before?

“I like that there hasn’t been a book quite like it before. The designs of the characters, by the wonderfully talented Freddie Williams, make me very happy. They don’t look like the Avengers or the Justice League. It just feels like a very new kind of superhero book. Even the ‘hero’ part gets a little shaky, at times.”