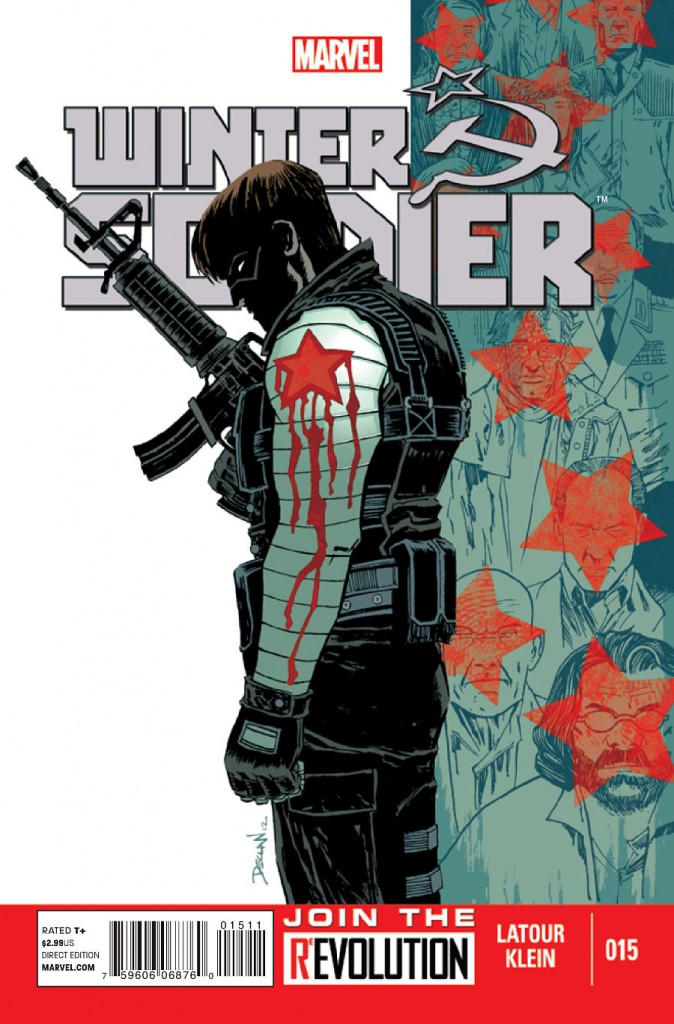 Declan Shelvey and Jordie Bellaire BRING IT with this cover.

Two weeks after Ed Brubaker’s epic run on the Captain America mythos ended with Winter Soldier #14, Jason Latour and Nic Klein pick up the adventures of our eponymous broken hero right where we left off. Unlike other changeovers that have occurred during Marvel NOW, Latour and Klein’s debut issue on Winter Soldier features neither a NEW #1 label nor a “BRAND-NEW DIRECTION” disclaimer. Instead, respectfully, Latour continues threads from Brubaker’s run, including the tragic status quo that closed out issue #14.

Facilitating the seamless change in creative direction, Jason Latour maintains the espionage-thriller tone of Brubaker’s run. This book is still very much about the darkest corners of the Marvel universe—those corners inhabited by double-agents, deep cover, and bar-room brawls. In the aftermath of issue #14, Bucky has gone on a reckless reconciliation tour, visiting past politicos and super-spies that he wronged during his past life as a Soviet super-assassin. Much like Brubaker, Latour identifies the tragedy in Bucky’s character and capitalizes on his overwhelming guilt and rage. This is a character that can’t help but be a hero, and yet he is plagued by his villainous past. Latour gets this, and it’s safe to say that he is a solid heir to Ed Brubaker’s Winter Soldier character.

Still, there are some pacing issues with this issue. Latour tries to set his run on the title apart early by including a prologue featuring mutant SHIELD super-SEALs in space facing off against a mystery woman who has hijacked a satellite. The Sci-Fi introduction is an interesting departure from Brubaker’s more grounded run, but these elements don’t appear again after the first few pages. I’m sure we’ll see this angle again in future issues, but its abrupt introduction and subsequent abrupt disappearance was jarring. Furthermore, the ending of the issue is a somewhat lackluster cliffhanger, especially considering the climactic and high-octane action sequence that immediately precedes it.

Nic Klein’s artwork is perfect for this book. I’ve previously written about his work on Nate Edmondson’s Dancer, another espionage-tinged thriller with sci-fi/fantasy elements. Whether it’s fast-paced gun-play, supernatural zombie-sludge, or alcohol-induced melancholy, Nic Klein’s pulp-stylings perfectly capture each and every moment.

Fantastic art and hard-boiled storytelling: this is what The Winter Soldier has been about since issue #1. Heck, that’s what the Bucky character has been all about since Brubaker reintroduced the character back during Captain America. Jason Latour and Nic Klein have huge shoes to fill as they take over this series, but if this issue is any sign, they are more than up to the task.