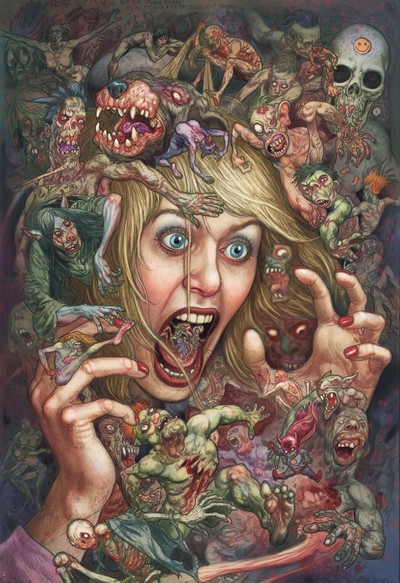 Steve Niles strikes fear in to our hearts again with Lot 13. A family packs up to move across country and stops, tired and hungry, at an empty apartment building to stay for the night. They barely get their bags unpacked before realizing that something is seriously wrong with the place. This apartment building is some kind of waiting room for damned souls and the family is set upon by all sorts of unhappy ghouls desperate to latch on to fresh meat.

Lot 13 is gory and bloody. It’s creepy as hell. The artwork is fantastic, just perfectly colored to create a nightmarish mood. It’s grey and foggy, almost looks like the pages are covered in dust. I love the amount of detail in the wounds of the dead and in the bloated, gooey faces of ancient, angry souls.

Issue #4 picks up with Ron, the family father, discovering that his status has changed and he’s now part of the group of trapped souls in the building. He’s not letting that get in the way of helping his still living family, who have been taken by ‘the judge’. The judge and his terrifying posse have deadly plans for Ron’s wife and kids. Ron thinks he’s figured out a way to not only stop the judge but to release the other trapped souls and he sets out on his violent mission.

Verdict: Buy this, if you haven’t already. The story is freaky and scary and the art chillingly dark and gloomy. Lot 13 is prime steak in the realm of horror comics. Another unfortunate cut in DC’s new lineup, it will only have one more issue  to go, which is a damn shame. Pick it up while you can.