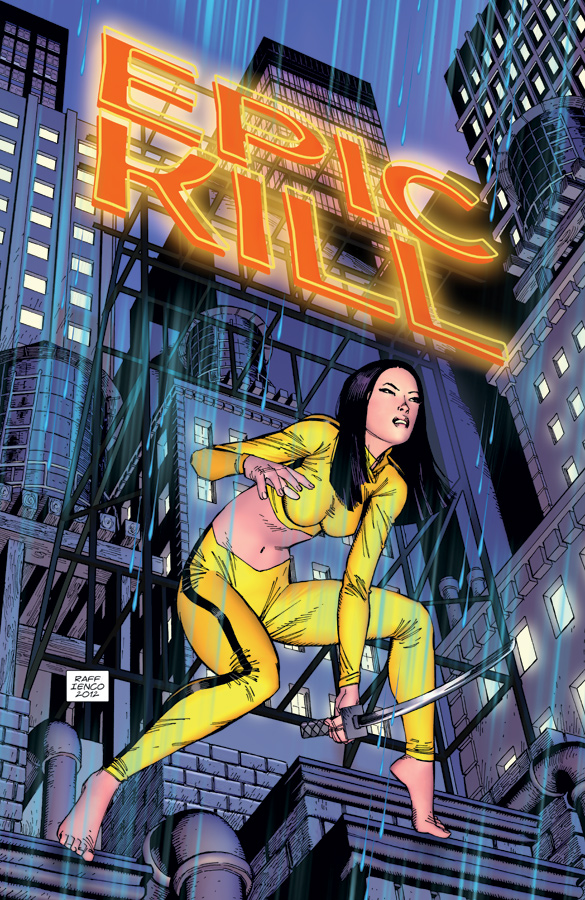 Story and Art by Raffaele Ienco

I dare you to show me someone who doesn’t love seeing a bullet cut in half by a katana. Ienco’s Epic Kill follows a young woman named Song as she navigates her post-amnesiac life as an assassin. The focus on action is fantastic for readers who enjoy reading hand-to-hand combat, but the story can fall flat for new readers.

Song is a quiet-yet-deadly assassin. From first glance, it doesn’t seem like there’s much to her character. Her revenge agenda drives her personality, creating a single-minded one-woman killing machine. Song is given the assignment of taking down Red-Hand, a questionably delusion villain with a history of violence. Their interaction prompts Song to reevaluate her allies and opponents.

Epic Kill #8 is action-driven. Ienco’s artwork conveys the movements of the characters smoothly without holding the reader’s hand from panel to panel. From fighting on top of a flying airplane to bouncing bullets off of walls in an abandoned building, Song demonstrates her prowess as a world-class assassin. Her distinctive bare feet and simple yellow outfit set her apart from most fighters in comic books. Her lack of footwear is mentioned several times in this one issue, leaving readers to consider the implications of the choice to go without shoes on these missions. Regardless of Song’s fashion decisions, she carries out her mission with unparalleled precision and efficiency.

Epic Kill #8 was an enjoyable read, but not one that drives readers to the next issue. Without knowing the history of the character or situation, Song’s plight does not strike a chord. For new readers, it will be more beneficial to pick up the first trade and read up on Ienco’s Epic Kill.