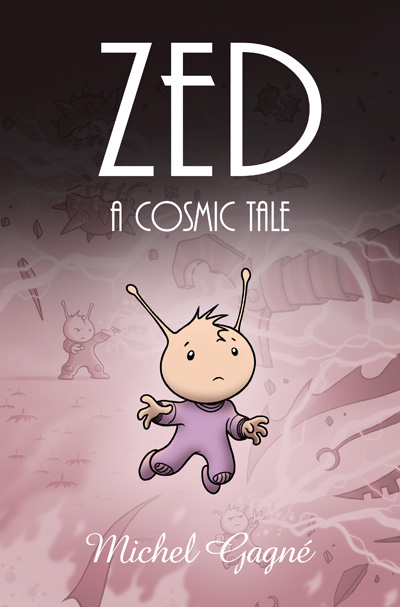 Written and Illustrated by Michel Gagné

Let me start by saying Zed is incredible. In this finally-collected edition of Michel Gagné’s stunning comics mini-series from the early ‘00s, our eponymous adorable alien hero embarks on a larger-than-life intergalactic odyssey, engaging with noxious planet-killing gases, star fleets hell-bent on his destruction, and omni-versal non-corporeal heavy-metal rockstars.

Zed is a tiny little Gallosian genius with loving parents and a new invention that could revolutionize the galactic energy industry. During an invention expo on the cultural-political capital planet, Xandria, Zed’s presentation goes horrible awry, kickstarting a story filled to the prims with political intrigue, questions of faith, environmental undertones, and sci-fi fantasy adventure.

The ten-issue mini-series was originally released over the course of nearly 11 years. Whereas the initial run of individual issues featured an evolution of artwork and storytelling style, Gagné has taken the opportunity with this collected edition to polish up some of the earlier chapters such that the aesthetic is consistent with his later issues. Gagné’s artwork is heavily inspired by his experience with animation and effects studios at Warner Bros. Despite the cartoon aesthetic, Zed is no children’s story. The high-fantasy sci-fi happenings are laced with multi-layered sequences that range from the disturbing to the morose to the tragic and grandiose.

Zed is, for all intents and purposes, a comics storytelling masterpiece. Michel Gagné clearly loved this character and this story, and his effort to revise and polish Zed for Image’s collected edition pays off tenfold. And, while we’re talking about Image, this edition of Zed once again proves the power and resonance of good creator-owned comics.