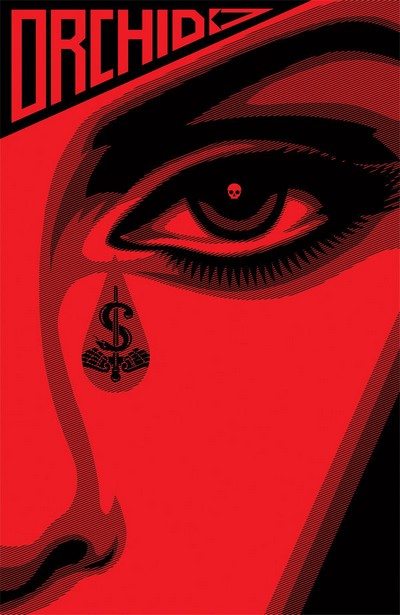 Orchid comes to a close this week after 12 issues of great art and an inspirational story of rebellion and loyalty.

This series began back in October of 2011 with an introduction to a new world ravaged by flooding and chemical waste. The people who managed to survive fall in to two classes: rich and powerful or poor and oppressed. The folks on top literally claim the highest points of land, comfortably out of reach of the ‘wild’, where genetically mutated creatures ferociously rule. ‘When the seas rose, genetic codes were smashed.’ General China lit the fire of rebellion for the “bridge people” and although he ultimately failed to free them from oppression, he succeeded in planting doubt in the mind of one ruthless ruler.

Orchid is a teenage prostitute who finds herself thrown in to the path of one of General China’s last rebel followers and is begrudgingly swept up in a rescue mission that will mean heartbreaking loss and soul shaking transformations for her. The path to sainthood and freedom is a bloody one, full of terrifying places, mysterious allies and power hungry enemies.

Written by Tom Morello of Rage Against the Machine, Orchid is a grand adventure that has a tender heart and well meaning intentions but a no-holds-barred approach to the grim reality of life in an oppressed society. It touches the question of our place in the world as humans once we are forced to answer for the careless abuse of the planet we inhabit and the creatures we share it with. It presents a vision of a world in which nothing is left to fight over except survival. Orchid is not a light read but it is fun and it’s just intellectually challenging enough to grab a more discerning comic book reader.

The art of Orchid is colorful and lush, each issue graced with a really impressive cover by Massimo Carnevale. Orchid has a flaw here and there, it stutters a bit, but the package of stimulating, smart story and well developed artwork make up for it by far. I’ve been a fan of this series from the beginning and wish it had gotten more positive talk time than it has. Sad to see it come to an end, but really looking forward to collecting all three trades on my shelf.