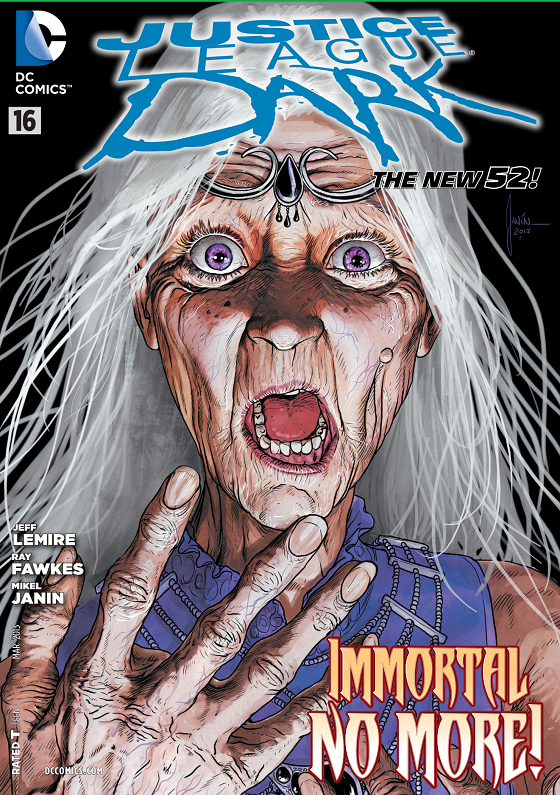 Justice League Dark #16 picks up right where we left off last issue and throws us right back into the thick of it. This issue pretty evenly divides itself between what’s happening with Zatanna and Timothy Hunter, and the fight between the rest of the Dark team and Network Enforcer Vikar.

We learn a lot in this issue about the world the heroes are trapped in and its history with science and magic. With the exceptions of Frank and Timothy, so far, this dimension is having an effect on the Justice League Dark. John Constantine in particular is a rather honest and compassionate man, and not his usual blend or sarcasm and a**holery.

Lemire and Fawkes balance the action and exposition between the two groups. It gives the book a nice pace. Rather than bog us down with pages upon pages of the history of magic and why Timothy Hunter has an important role to play, the action from the rest of the team is spliced in rather efficiently. Lemire and Fawkes use mini-cliffhangers in the both the fight and the history lesson, as their points for switching the narrative. I enjoyed the switch and it kept me interested and glued to the pages.

Janin and Cox also bring a lot to this issue. I enjoyed the art in here and thought it added to this strange almost-bizarro world. The art is very clean, and the colors are very bright and vivid. A stark contrast to the image some might have in their mind when opening a book with “dark” in its title.

This issue is a buy! Longtime fans will enjoy seeing a different side of the characters as well as learn more about the books of magic. This is only the second issue in a new arc, but Lemire has been weaving these threads since he joined Justice League Dark. If you’ve been enjoying the series, then you won’t want to miss out.

Jumping on point: You’ll want to at least go back to the last issue. Issue #9 is also a good point to go back to if you want to enjoy this story in its entirety.