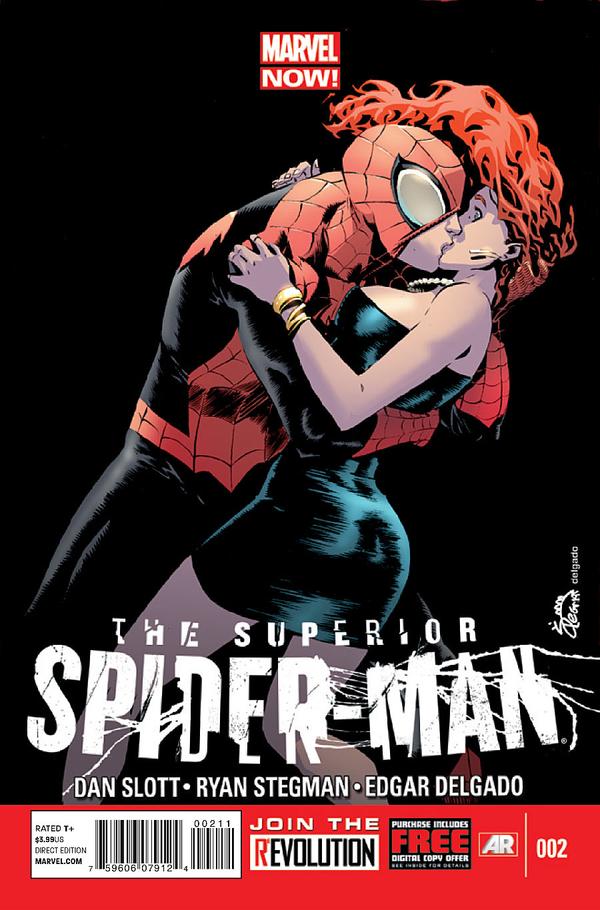 It’s date night for “Peter Parker” and Mary Jane, although things don’t go as smoothly as they’d probably hope. “Peter” is constantly denied anything more than a quick kiss (which irks him to no end), their initial dates seem too old fashioned for Mary Jane and whenever things seem to be going smoothly, trouble seems to strike. It also doesn’t help that “Peter” seems like a completely different person, which is starting to bug MJ and Carlie. But “Peter” has a solution, and while his new Spider-Bots seem to work wonders (especially during dates), he can’t see everything all at once. All the while the ghost of the real Peter is watching, keeping an eye on “Peter” to make sure he doesn’t screw up.

Slott’s writing is definitely a mixed bag for me on this one. I do enjoy the twists and turns of the story, especially the last panel twist (which guarantees I buy the next issue), and the pacing of the issue is quite good. I also appreciate that Slott, who’s handled Spider-Man for years, is trying to make a conscious effort to change the way we know and love Spider-Man. It’s too bad we have to do this at the expense of character development though. The Horizon Lab guys, who were a major part of recent Spider-Man stories, have been relegated to comic relief for one or two panels. Mary Jane, who’s come into her own in the past couple years, is also stripped of most of her character and changed to just another girl for “Peter” to pursue. Speaking of Peter, in his ghost form he’s whiny, unlikable and complains about everything. The other “Peter” is aloof, stand-offish and wholly unlikable as well.

Ryan Stegman’s art can only be described as present. It’s nothing spectacular and does nothing to grab the reader, but it also does a proper enough job that you never really tend to notice it in the first place. I’m still trying to figure out whether that’s a good thing or a bad thing, but I can at least appreciate an artist who can let the writing take the reigns and be the main focus of the book. That said, the inks and colors are quite impressive and striking, though most of the credit has to go to Edgar Delgado, who handles all of the color art.

Superior Spider-Man is a series that intrigues and confounds me at the same time. For all the poor characterization, dull action, and whining or stand-offish (depending on the Spider-Man) dialogue, there are a few things that keep me interested enough to come back for another issue. Whether it’s the last panel twist they’ve inserted into both issues so far, the bigger focus on tech, or the fact that they have made a conscious effort to switch from the status quo of Amazing Spider-Man, I’m still intrigued. So I give it a hesitant recommendation, but know they still have a ways to go.