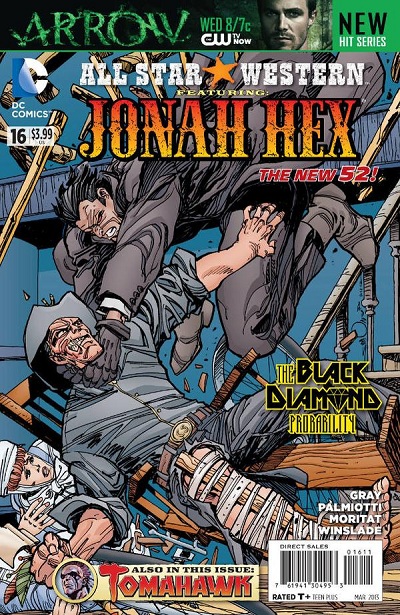 Art by Moritat and Phil Winslade

If you had asked me a year ago if I would be interested in a Western, well, anything; I probably would have politely passed.  But in the last year plus, I started dabbling with titles such as The Sixth Gun, All-Star Western, and even the stories in American Vampire; which reignited a flame for the old gun-slinging days that I have not had an interest in since I was a child.  Romanticized to the N’th degree in most cases, sure, but there was no doubt it was an interesting setting that still had stories to mine even in this modern age.  Add in a link to the DCU proper by putting Jonah Hex in Gotham City, make it a buddy cop story with Amadeus Arkham, and sprinkle in some supernatural flair; well then you have my interest fully piqued.  And though that interest started to wane last issue as the Mr. Hyde storyline progressed, can the big finale to the Black Diamond storyline put things back on track?  Sadly no for this chapter, but I think I know why.

After last month’s issue left Amadeus Arkham imprisoned and Jonah Hex crippled, the gruff gunfighter has been forced to keep a low profile at the Arkham Manor as his body tries to heal.  Trapped in the home with Amadeus’ insane mother, he drowns himself in a bottle to pass the time; until Mr. Hyde decides to make a house call.  Can he push through the handicap to save the residents of Arkham, and himself, from the strength of the man that put him in his current condition?  In the backup, Tomahawk finishes off the relentless pursuit of his enemies as he and his forces hold a British fort under seige.

I really enjoyed this series for its first 13 or so issues.  Full of colorful characters, an eccentric setting for a western-based hero, and peppered with abnormal opposition to Jonah and his pals; All-Star Western was a fairly fun read each and every month.  But, as I stated above, with the start of the Mr. Hyde arc, a now obviously critical element of the formula was removed when Tallulah left, Amadeus went off alone, and Jonah was forced to work solo without the strong foils that had made the book so fun.  And that is what I think has really pulled a lot of the steam out of the forward momentum this title had at first.  The stories told have not been the most compelling at their core, but the characters and their interactions have been the driving force thus far.

Issue #16 suffers slightly less than the previous issues of the arc with the addition of a sassy house nurse tending to the wounded Jonah, but she lacks the panache and eccentricities to really allow Jonah’s jerkish behavior to shine.  Mr. Hyde, a relatively bland antagonist as well, is never really given much to work with either; making the entire Black Diamond affair an almost blatant mandate as it is taped onto the story at large.  On the positive side, the entire situation that has kept Team Jonah apart looks to be coming to an end, which will hopefully lead to this title getting back on track.

I honestly cannot say too much about the backup, as it is a ‘classic’ western-era story, and not something aimed at my particular tastes.  While I am not a fan of that storytelling venue, it is a solid tale of Tomahawk and his tribesmen; so if that is something you enjoy, you may want to take a look here.

Artistically speaking, Moritat continues to draw the bleakest tale of gunslingers I have ever seen, which entirely works when you take into account that this takes place in Gotham City.  The detail on his background work is meticulous and awe-inspiring, but it can also highlight flaws in the foreground by looking so sharp in comparison.  Faces continue to have some minor issues, but are easy to overlook when there are so many panels in each issue that just work.  Winslade’s work on Tomahawk has been nothing short of beautiful, even if the story being told is not my cup of tea.  Awash with the classical western reds and yellows, it stands out with an almost timeless quality that looks both old and modern at the same time.

Pass.  The above may lead you to believe this is a terrible book, but it truly is not.  It’s just suffered through a bit of a rough patch that looks to be resolved in the very next issue.  Usually a fun title, it has momentarily lost that buddy cop styling, but it has not turned me off from the book itself in the long run.  Here’s hoping for next month!

Jump-On Point:  All-Star Western 14+15 would give you the entirety of the arc up to this point.