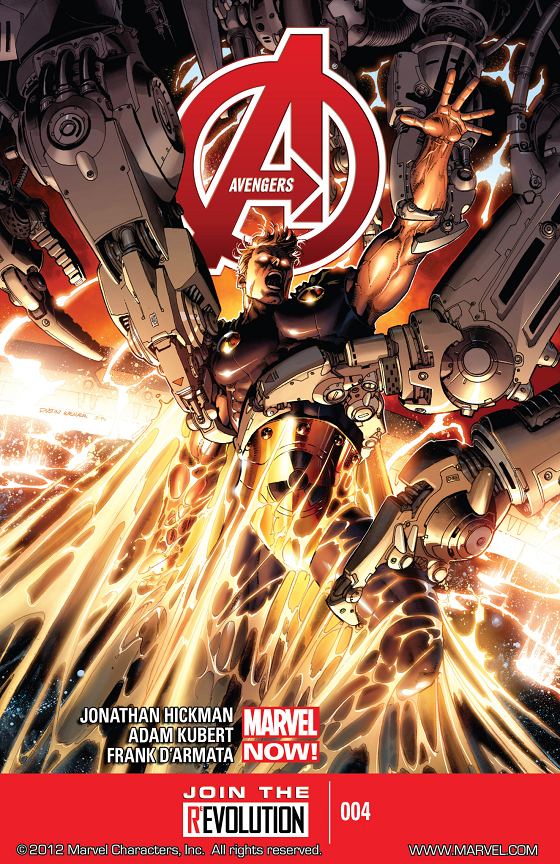 Usually in cases when it feels like I just read a book I would say time flies by, but it has only been a week since the last issue of Avengers. There is another one coming next week as well! Marvel, you so crazy! Jokes aside, Avengers #4 is the start of a new arc and building off the previous one.

The various Avenger teams are dealing with the Origin Bombs that Ex Nihilo sent to Earth back in issue #2. Compared with the fairly heavy and dense issue we had last week, this issue feels a lot lighter. It’s that massive cleanup after a killer all night party. I rather enjoyed the change up, and appreciated that Hickman shifted the focus over to a lesser known character, Hyperion. This book is shaping up to have a large cast of characters, and a few pages devoted to one character each issue will go a long way with creating sympathy and emotional ties to the characters. If Hickman’s previous runs on FF and Fantastic Four are any indicators, then we should be expecting him to continue to develop connections between the reader and the characters.

I am particularly enjoying the tone that Hickman uses when narrating this series. It has that divine, ominous feel to it; something big is still yet to come. There are also hints of connections to Hickman’s New Avengers. I am reading both series, so it was nice to see the connection, but I wonder how deep it will go. If you aren’t reading New Avengers I wouldn’t worry. The hints here could just be a tip of the hat to acknowledge that this is a huge shared universe.

This issue also sees a changeup of the art team. This isn’t too uncommon with Marvel’s double shipping titles. Adam Kubert and Frank D’armata do a pretty decent job on art. D’armata has kept the color palette pretty close to what Dean White and crew had been using previously, but I miss that slightly painted feel from the first arc. Kubert’s art isn’t bad, but for me it is not something that stands out as breakthrough. He gets the job done, but I would have liked to have seen a little more detail in the backgrounds. The level of detail tends to vary from page to page.

If you have been enjoying this series and want to keep finding out what is happening, then buy this book. Hickman’s story is still getting started and it is going to be a long ride. I wouldn’t say this issue is a must buy, but it is an enjoyable read. If you are interested in Hyperion, then you might want to give it a look as well. If your wallet is tight, I might recommend waiting until the trade comes out. As often as each issue is getting released, you shouldn’t have to wait too long.

Jumping on point: This is the start of a new arc, so this would be a good, lighter issue to come onboard Avengers.