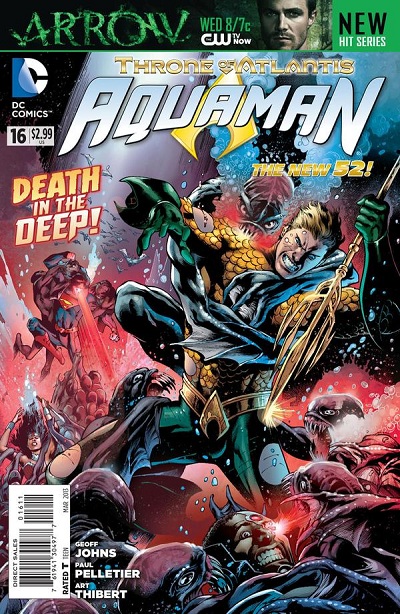 Being a relative infant of a reader in comparison to the long history of comics, I have often been mystified as to how the medium transformed from a collection of individual intellectual properties, populating their own worlds and settings, into the shared universe(s) that dominate the landscape today.  I can only imagine what it would have been like for those early readers to such a unique situation in literature, seeing the characters they loved separately now joining together to tackle problems beyond their ability to handle alone.  And while the DC New 52 initiative will never come close to matching those early days of exhilaration, it is at least channeling a part of it; as the Throne of Atlantis crossover continues into Aquaman #16, throwing open the windows of the shared universe, and finally starting to give it that lived-in feeling.

Taking place mere seconds from the last panel of Justice League #16, Cyborg has completed his call to arms from STAR Labs, and is preparing to undergo upgrades to assist his friends.  As the newly drafted members of the League struggle to hold the line against the Atlantean armies, the defeated original members have been banished below the waves to a fate worse than death.  Aquaman, working alongside an incapacitated Batman to reunite the team, must also defend his ensnared allies from the clutches of a familiar foe.  Meanwhile, as Aquaman and friends learn new truths about the creatures they faced, Cyborg also discovers the truth behind who started the war; and the role that each of them are playing in a much larger game.

Now that the DCU has been reestablished and graduated from its initial training wheels, Geoff Johns has been able to utilize his wonderful revamp of Aquaman to jump-start the shared universe into his much more comfortable full gait.  Bringing in characters from far and wide, Aquaman #16 is the big first step in recreating the interweaving tapestry of personalities that has endeared readers to the medium for decades; but done so without sacrificing the focus on this Arthur-centric tale.  This particular issue, expanding both the mythos of the Aquaman universe as well as the personal drama in his current challenges, provides a swerve in an otherwise simple story that will have ramifications on both storytelling scales equally.

If I had to give one criticism though, it would be the dependence of Aquaman knowledge to really feel the impact of the shift.  It has been satisfactorily established in the crossover itself to work, but the difference was just noticeable enough to make me go back and re-read all four issues so far to see how it played out for those joining in just for Throne of Atlantis.  It’s a reach for a criticism, but it’s all I can give in this otherwise wonderfully executed story thus far.  Adding back onto the compliment pile of this mini-event though, the pacing has been pitch perfect, incrementally escalating in scope with each chapter of this five-part story.  And, with only one segment left, there will be a lot of pressure to stick the landing on this story; something the preceding four chapters at least gives me confidence in.

Paul Pelletier has easily proven me to be nothing more than a nervous twit.  As I stated last month, I admittedly had concerns with him coming onto art duties after the stunning job that Ivan Reis provided the title, but Pelletier has shown that he is more than capable of shutting me up.  Light line work, with a fluid capture of motion, his underwater scenes provide a true sense of the environment these characters find themselves in.  Clearly having fun with the addition of so many different characters to the title, he was also able to portray a unique look and style for each while still maintaining a common feel throughout the book.  Standing out in this issue, his cinematic moments of the shifting tide of battle as well as the big reveal play wonderfully to the overall story, and display a true sense of directorial knowledge.

Buy.  I truly stop and read over these issues again with each installment to make sure I am not being too positive; but Johns, Pelletier, and Reis have been providing a story that is the bee’s knees, all that and a bag of chips, and most importantly, just an overall great read.  So while it may not be the same experience as the birth of a universe, it is most certainly a fun and entertaining opening bell for the integrated New 52.

Jump-On Point: Justice League/Aquaman #15 to Justice League #16 will get you the full story up to this issue.  Items from the entire Aquaman run are being referenced in this crossover which provide a healthy amount of weight, but are not essential to the the story.