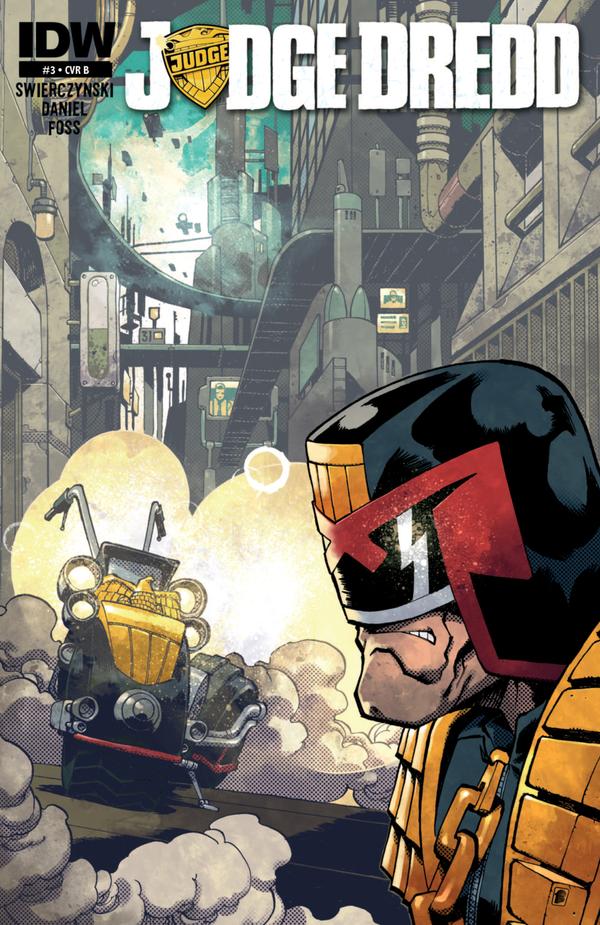 Judge Dredd #3 takes a break from the robot takeover to focus on a kidnapping that’s more complicated than Dredd had ever anticipated. Add in a naked man running down a dark alley and you have all the ingredients that make up this issue. But does this distraction from the main overarching plot help or hurt this comic? After reading issue #3, I can definitely say it’s the former.

The first story follows a Trump Alert (when a rich citizen of Mega-City One is kidnapped) that gets the attention of Judge Dredd. But when the man is found minutes after the alert went off, questions are raised as to the legitimacy of the alert. Before anyone can ask any questions though, the recently found man is seen on a television screen with the kidnappers demanding a ransom. So who is the real man and which one is the fake?

The second story follows a man who escapes from a room where he’d been held captive for three days. Despite having no clothes and no idea where he is, he knows where he must go if he wants to get back at the people who put him in that room. When he gets home to properly prepare though, he realizes that maybe having no identity is better than having a wanted identity.

While the first two issues had good stories, this is the first time where both stories are equally great in their quality. What’s more impressive, and something I’d like to see in the future with this series, is that both stories tie into each other and the back-up answers one of the big questions readers had after the first story’s big cliffhanger. Swierczynski seems to improve with each issue and his love of the Mega-City One/2000 A.D world is evident in each page. Dialogue flows well, characters are fleshed out, and the darkly funny humor is there, even when you’re not expecting it.

Nelson Daniel continues to knock it out of the park art-wise on the main story. The grit and grime of Mega-City One, mixed with the neon colored signs and even more colorful characters is a beautiful combination and Daniel mixes well with Swiercynski’s writing. Panels flow incredibly well and are structured to make the story feel almost cinematic in nature. Faces are expressive and really convey the emotion of the speaker well, and I always love a comic that knows how to utilize Kirby dots to their full extent. Langoon Foss’s art on Naked City is impressive as well, although the clean lines, bright faces, and even brighter colors can be slightly jarring at first. That said, it’s incredibly solid and considering he only had six pages to work with, he did a great job.

Judge Dredd continues to be a fantastic love letter to the classic 2000 A.D. Judge Dredd stories that fans new and old will definitely enjoy. The stories are gripping, the artwork is fantastic and it’s worth every penny. If you have any interest in reading this comic, please do so, you won’t regret it.